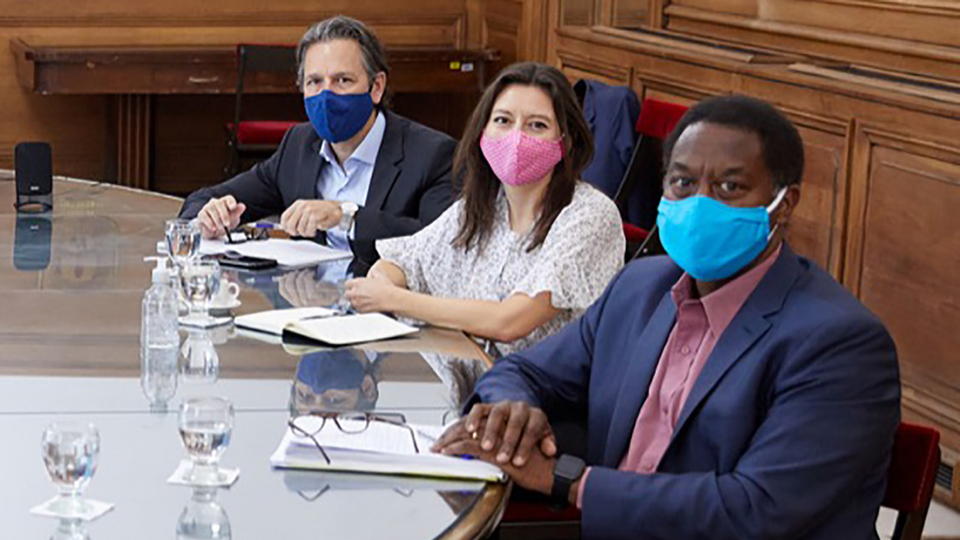 Prior to the departure of the IMF mission that visited the country in the last two weeks, the Minister of Economy, Martin Guzman, withdrew the move “out of the box”: at the Palacio de Hacienda, he met with members of the international body’s technical body with the “most political” group among the country’s leadership leaders: the Association of Argentine Businessmen (AEA). WITH Paolo Rocca At the head, the “political leadership of economic power” (as defined by Alfredo Zaiat) had to present his own vision of the situation and the solution he set before the representation of the Fund and the Minister of Economy, at the initiative of the latter.

Although there was no official information, it turned out that the meeting took place this Friday at 5.30pm in the Belgrano room at the Palacio de Hacienda, lasted almost two hours and was proposed and convened by Guzman with minimal anticipation, less than 24 hours. The intention expressed by the promoter and organizer of the meeting was that IMF technicians knew from the mouth of the leadership their proposals on alternatives presented to Argentina to get out of the current crisis, obliging them to contribute to the solution.

Guzman followed Sergio Chodos, executive director for the IMF’s Southern Cone. In front of the three members of the IMF mission (Julie Kosack, Luis Cubbedu and Trevor Alleyne), sat Paolo Rocca (Techint), Jaime Campos, Guadalupe Mazulo (Head and Director of Institutional Relations of the AEA), Enrique Cristofani (Banco Santander), Federico Braun ( La Anónima) and Alberto Grimoldi (signature of the same name). Pagani (Arcor), Magnetto (Clarín), Galperin (Mercado Libre) and other important references of the Association of Argentine Entrepreneurs were not present, which certainly justified their absence in the urgency of the call.

In his introduction, Guzmán emphasized the values ​​of dialogue, the need to reach consensus on the pillars of economic stability and predictability. He pointed out that Argentine society today has a huge responsibility to create its own future and solve its problems, as the rest of the world can cooperate but not replace the answers that must be reported internally.

He then reiterated the Argentine government’s stance before the IMF, demanding a new program of expanded facilities that allows it to negotiate debt payments for more than $ 44 billion, with a four-and-a-half-year grace period to begin payments.

In a statement closing the visit, the IMF mission did not mention the meeting. But he reported that the delegation “welcomed the intention of the Argentine authorities to request a program of expanded facilities, as well as their intention to support it by broad political and social consensus.”

“There is a shared vision between the team and the authorities that addressing Argentina’s short- and medium-term challenges will require a carefully calibrated set of policies to promote stability, restore confidence, protect the most vulnerable and lay the foundations for sustainable and inclusive growth,” the mission said in a statement. negotiations remotely continue over the next few weeks.

Returning to Friday’s meeting, business leaders had to express their expectations regarding the Argentine economy, explain why they refuse the solidarity contribution already half-approved by Congress, their views on “tax pressure” and exchange rate instability and conditions for private investments. This was not the first time that these businessmen had contact with officials of an international organization, but it is certainly the first time that they have to do so before the Minister of Economy in the official sphere and on his initiative.

When talking about the need for a “broad agreement” between different social and economic sectors to overcome the crisis, the issue of “consistency” of the proposal is often overlooked. An issue Guzmán seeks to highlight in his discussions, formerly with private creditors and now with the IMF: he does not accept payment agreements or commitments that are not in line with Argentina’s goals of economic and social recovery, inclusion and development. .

Are the proposals of Argentina’s top management of economic power in line with any of these conditions? Meetings like this Friday at the Palacio de Hacienda may contribute to recognizing, even before the IMF itself, what arrangements are possible with whom.

Coronavirus in Santiago del Estero: there were no deaths, and 52 new infections were confirmed

Warnings for storms and strong winds apply to Córdoba – News

Urgent: Griezmann was fed up, broke the silence and admitted his dialogues with the Messiah

China is launching a mission to return material from the moon