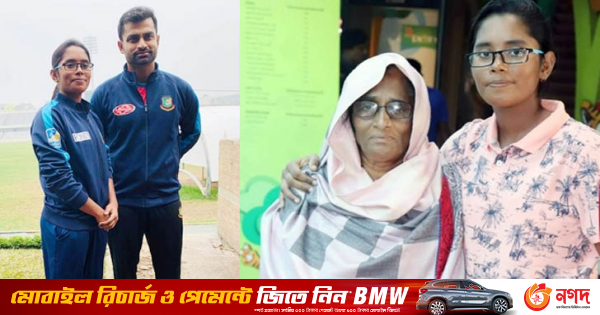 The cricket website Cricinfo has published a list of 20 potential women in cricket who will rule the world of cricket in the next decade.

Cricinfo has compiled a list of future women’s cricket stars based on the opinions of world-renowned players, coaches and commentators.

And left-handed opener Murshid Khatun Happy took a place on that list. Murshid, who made his international debut just two years ago, is now the pride of Bangladeshi cricket.

But that Murshidai learned to play cricket with various adversities. Seeing him play cricket, he also beat his siblings.

Not just that; The boy dressed up to play cricket on the field regularly.

Murshidar’s house is located in Khoksa upazila, Kushtia district. He is the 11th child of Kazi Golam Mostafa and Hawa Khatuna.

“I’ve been playing various games with the boys since I was little,” Murshid told the media about how he got into cricket. Learn to play cricket with them. At the time, I kept my hair short like a boy. I used to keep boy’s clothes in my school bag. Realizing the opportunity, I would go to the store, take off my school uniform, and go down to play. At the end of the game I would come home after my school dress.

Murshid said that watching cricket on television caused great interest in him.

The adults knew how to lift the ball during the game on the field. And as soon as the adult game was over, Murshid would come down with the younger boys.

Because of that, he was rebuked by his older brothers and sisters. Petunio also ate. Even after that, he didn’t stop playing cricket.

Seeing such a commitment to the game, Kazi Keramat Ali’s older brother finally accepted him into the BKSP.

Murshida said the brothers and sisters I beat for playing cricket are now the most inspiring.

It should be mentioned that Murshidar made his debut in the women’s cricket team in Bangladesh in 2016. So far, he has played five ODIs and 10 T20s for the country. He entered the debate after playing an inning of 43 of 36 balls against Pakistan in Brisbane in February last year.

In addition, the stakes of 30 performances with 26 balls against India in the Women’s World Cup stood out.

The 21-year-old Murshid has taken a place on the list that will rule women’s cricket in the future. Cricinfo called this young woman the future good of Bangladesh.

The list includes five Australians, four Indians and three English cricketers. In addition, two each from South Africa and the West Indies, and one each from Sri Lanka, Pakistan and New Zealand.

Incredible income of India by organizing IPL in UAE! | 978913 | The voice of tomorrow

Rumors about the oath of the new Minister of State bangla.bdnews24.com