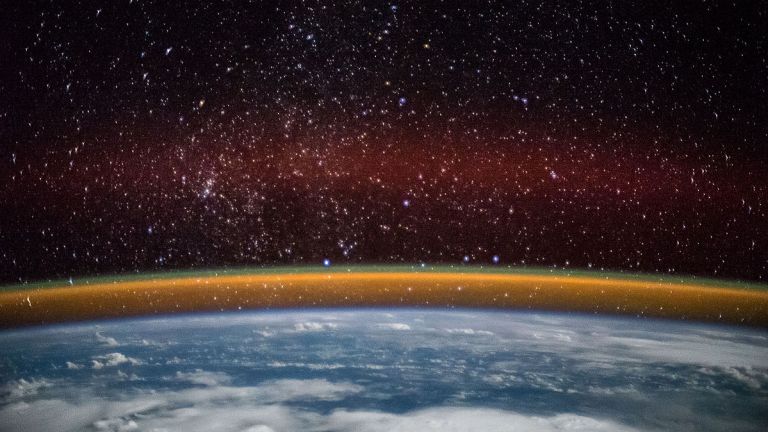 Ionosis is the peak of the Earth's atmosphere. It starts about 80 kilometers above the Earth's surface and extends to about 500 miles above the Earth. In fact, there are many satellites and even the International Space Station. Gravity is missing, but though clearly expressed – the cosmic vacuum is not pale. Ionosphera still has particles of Earth's atmosphere that affect the cosmic devices in it, slow down the speed and cause it to fall to the ground. Because of this ISS orbits occasionally rise, and many satellites have either small engines or deadlines.

The particles from which the ionosphere is composed are electrically charged and ionized by the sun's radiation – therefore it carries its name. There are known northern shades in it, but less well-known and studied phenomenon.

It is the so-called "air glow" that encompasses Earth halo golden light.

The phenomenon is a consequence of the influence of solar wind on the nitrogen and oxygen molecules in the ionosphere.

Solar radiation bombs atmospheric gases in the ionosphere until they lose the electron, creating the sea of ​​electrically charged ions and electrons. The result is "air glow". It can be observed at all latitudes, but is rarely seen with the naked eye.

The ISS, however, looks great, as the cadres show.

On November 7, NASA had to launch an ICON satellite to examine the upper layers of ionosphere in detail, allowing scientists to learn more about "shiny air", its shadow of color and, in essence, knowing more about our planet.

Ionospheres study has practical implications because the satellites will be more durable and will provide more precise navigation.

It is possible that scientists learn important things about Earth's ionosphere that can be used to find life on other planets.

It is known that the ionosphere also has Mars, Venus, Uranus, Jupiter, and the moon Saturn – Titan.