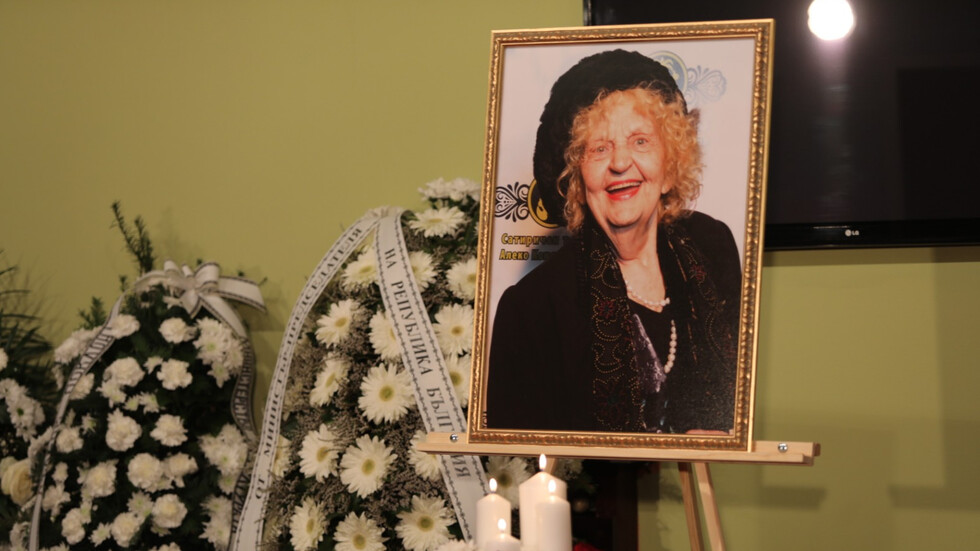 Last goodbye from the great Bulgarian actress Tatiana Lolova. At 11 a.m., worship began at the Satirical Theater, where she played most of her life. Anyone who wants can bring a flower to the theater lobby and write a few lines in a message book to the actress.

There are already queues of people at the site who want to say goodbye to Lolova. The management of the Satirical Theater ensures compliance with all security measures.

“Today we pay tribute to her talent. One of Bulgaria’s most beloved actresses is gone. But he left us his smile. This smile will always be with us,” Sofia Mayor Yordanka Fandakova said.

“I can say that the last Mohican of this great generation of Satirical Theater, Bulgarian theater and cinema has left. The great, great Bulgarian actress has disappeared,” said Toncho Tokmakchiev.

“And she went on stage. Honor her bright memory! Make her flight easy. Tanya was a very good person, besides being a great actress. Tribute to the great actress Tatiana Lolova “, shared Maria Grubeshlieva – Muki.

“With this smile and with this kindness and bright eyes, everyone perceived it. It’s magic, it’s something out there. It comes from above, a great generation, great people and I’m very happy to have had the opportunity to meet them, to be together, to communicate, to be close. Yes, we cannot bring life back, it is clear, it is happening, but somehow we can make it more smiling, more inspired, “said the director of the Satirical Theater Kalin Sarmenov, as reported by BNR.

MEMORIES: Friends and colleagues of Tatjana Lolova about the life and roles of the beloved actress (VIDEO)

Today, actor Svetoslav Peev shared on the air of “Hello, Bulgaria” that he is going to the theater with the thought that he will part with a very big man.

“With a man who told me many times what to do. She was an extraordinary woman. She was a man of the world. When I came to the theater, it was a miracle. Such a beauty, above all and terribly intelligent. Nature created a man who had all in all. Not to mention the talent – she was very talented, “Peev said.

For him, the great Tatjana Lolova is “an incredibly beautiful person, an amazing smile, intellect and a great friend.”

One of the legends on the Bulgarian scene passed away after a serious illness. Generations of Bulgarians will remember her for her cult roles from the films “Warm”, “Dangerous Charm”, “Bon Chance, Inspector”, “13th Prince’s Bride”.

The great Tatjana Lolova has disappeared