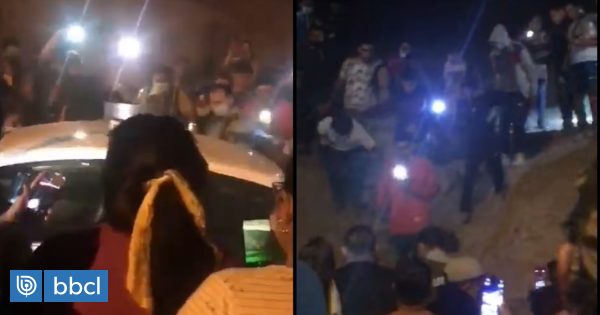 A strange incident happened on Friday night in Antofagasta, when the mob tried to lynch the man, He is accused of raping a woman on the hill of El Ancla in the city, for which the Carabineros had to stand up.

The event was recorded last Friday after 11pm, when a group of between 80 and 100 people attacked a couple descending from Mount El Ancla, por that Carabineros had to rescue them and keep them in police vehicles.

But police intervention did not stop neighbors, who continued the aggression, attacking vehicles and prompting police to use “chemical deterrents” because of the persistence of the attack.

The Crown Lieutenant of the Antofagasta Prefecture, Álvaro Muñoz, explained the confusing incident, noting that at first loss of a person at Cerro el Ancla, but when police arrived at the scene “they found a group of 80 to 100 people, who started dropping a man with a woman, attacking a man”.

“Carabineros took a man and a woman to clarify the facts and put them in a police vehicle, so that they would not continue to attack them. In these circumstances, people from the place start throwing various elements, starting to damage police vehicles, as well as throwing stones at Carabineros staff, ”the official explained.

“These facts stem from the bad information that was passed between the mouth and social networks, which initially spoke of sexual abuse.”, Muñoz indicated.

But this information was not real and according to those who participated, they were drinking alcohol on the hill, when the woman started screaming, which the neighbors would misinterpret.

“It is possible to determine that the moments before consuming alcohol and the woman at the moment of mercy began to scream, which the neighbors misinterpreted (…) An appeal was filed against them, but they were arrested for violating Rule 318, ″ the lieutenant colonel said.

As a balance of these incidents, the couple suffered minor injuries as a result of the attack, in addition to which two police officers were injured and three police vehicles were damaged.

Piñera: “The government’s decision on the elections will be timely and will give priority to health and life”