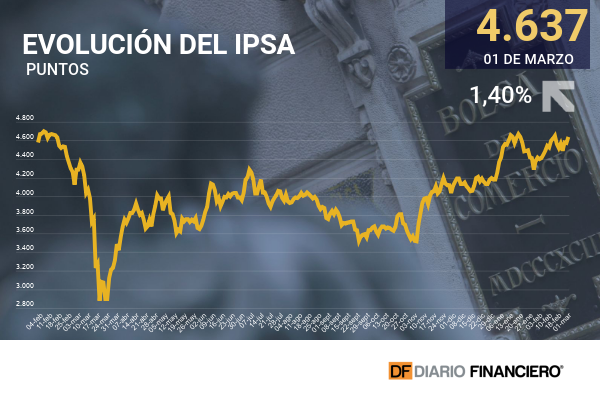 The Santiago stock market closed with a progress of 1.40%, bringing IPSA to 4,637 points.

The stock market had one of its best sessions after the performance on Monday Ten-year US Treasury bonds fell 1.449%, after reaching a one-year high of 1.614% last week.

Also, The passage of Joe Biden’s $ 1.9 trillion tax package in the House of Representatives on Saturday sparked optimism among investors eager for a quick economic recovery in the U.S. Now the bill, which also includes $ 1,400 direct checks per household, will go to the Senate to vote.

The situation in Chile

On the contrary, the biggest falls of the day were Cencoshopp, with a drop of 1.29%, Cencosud with a decrease of 1.23% and Engie Energía Chile, which lost 1.05%.

The drop in stakes in Horst Paulmann companies followed Friday’s announcement that his daughter Heike Paulmann would temporarily take over the presidency while the group’s founder is on leave.

Europe closed on the first day of March with all its indexes rising amid falling US treasuries and better economic expectations due to the approval of fiscal stimulus packages.

Similarly, FTSE 100 had a growth of 1.62%, mainly influenced by mining and insurance companies, which brought the index to 6,588 points. Accordingly, investors are paying attention to the announcements of the Minister of Finance on Wednesday Rishi Sunak regarding the recovery of the British economy.

According to preliminary information, the minister will announce an initial investment of 12 billion pounds for the new infrastructure bank with the aim of financing some specific projects after Brexit.

Asia, meanwhile, saw significant growth in most of its indices after tech companies Nasdaq recovered from the fall last week.

“The Nikkei will sooner or later return to the 30,000 level, depending on what the U.S. bond yield is,” said Masahiro Ichikawa, chief market strategist at Sumitomo Mitsui DS Asset Management.

Also, Hang Seng reached 29,452 points with an increase of 1.63%, after the Hang Seng Indexes announced it would make changes to Hong Kong’s main stock index to cover 100 companies, which will better reflect the range of companies listed in the country.