Housing prices in the Czech Republic hit the ceiling, Prague no

"The rise in real estate prices has now hit its ceiling with rising prices faster than wages," says Petr Makovský of Reality.iDNES.cz.

Large cities have long listed record housing prices. However, in Brno, this pace has slowed considerably in recent months. "Everything suggests that the moment when prices are rising," says Trikaya CEO Alexei Vesely.

In the first half of the year the price of one square meter in a new apartment in the second largest city of the Czech Republic fell to 75,000 crowns.

Even in other regions, property prices have already hit the ceiling. "They are no longer in the Moravian-Silesian and Olomouc regions or in the mountains. Significant stagnation or even falling are also recorded in Zlín and Ústí regions," said Martin Fojtík, Managing Director of Reality Fincentre.

The drop in prices in Ústí nad Labem confirms Trigem developer data. In its analysis, the average price per square meter of a new apartment in the Ústí nad Labem region fell by nearly six percent compared to the second quarter of this year.

The analysis also brings other signs of real estate market cooling – average prices also dropped on an annual basis in the regions of South Bohemia and Liberec. A similar scenario, however, certainly does not expect the real estate market in Prague. Even here, based on year-to-year comparisons, it can be seen that the rise in apartment prices begins to slow down in recent months. 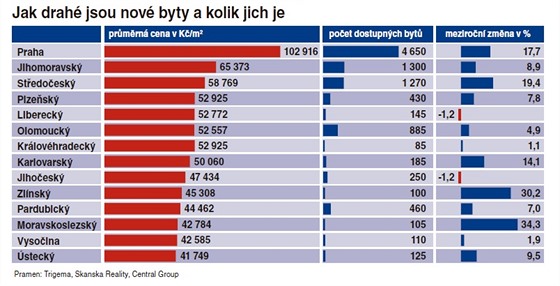 From July to September it was 15.5 percent, with 24 percent in the previous quarter. This stems from data from developers Central Group, Skanska Reality and Trigem. The average price per square meter in the new apartment in Prague exceeded one hundred thousand kronor. But buying a new apartment is not worth the wait, prices will most likely continue to grow.

"The sale price corresponds to the current limited offer of new projects, and the central bank has hit the market by setting new rules for mortgages." Estimates now reach a third of the fewer candidates, "said Executive Director of the Central Group Michael Tomaskova.

The new rules of the Czech National Bank have been on the market since mid-year. The most discounted apartments appeared in June, the Valuo.cz platform, which collects and evaluates the data of leading domestic real estate servers. 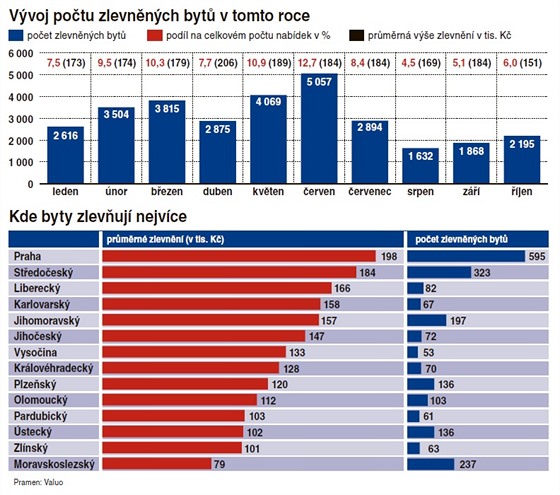 "This month, we saw dealers with 5,057 requests, or 12.7 percent of our advertisements," says Radek Šiter, founder of the website. The average discount for this month's apartment reached 184 thousand crowns. In June, the CNB announced that it would tighten the criteria for mortgage lenders, which could motivate the owner to accelerate the sale. In October, for example, there were only 2,195 discounted apartments on the market, less than half.

Customers can no longer pay more

Strict rules of the mortgage have been in place since October, and they are increasingly feeling in the market. "There were a few people who were interested in some properties, where there were seven on average, now there are three, and sometimes we have to wait for the buyer," says Pavel Hassman of Re / Max Real Estate 4You.

Bidli realty real estate agency also saw the decline in interest on mortgages. "I added that people interested in housing expect that the regulation of the CNB must cause a drop," explains director Ondřej Mašín. However, according to him, most of the sites are still not declining.

"Measures of the Czech National Bank can be characterized as an artificial limitation of demand, which of course should cause a fall in real estate prices, but this is not yet happening," said Milan Roček, the CenováMapa.org portal manager, who carefully monitored real estate prices in the Czech Republic Republic.

"Maybe the current economic situation, we are going through the richest period of the past three decades." In every region there is no high unemployment, and income is growing, so there is no pressure on the market, willingness or need to sell real estate at a lower price. "

However, it recognizes that prices in all regions are beginning to stagnate. According to him, it is underlined by the fact that more and more apartments are sold. "There is no demand-driven offer. We are in a situation where sellers are not ready to cheat, and buyers no longer want or can not pay more," Roček says.

Developing developers are registered for sale. "The biggest decline has been recorded in the last three months where the markets have grown without the past, such as the Jihomoravský, Středočeský and Olomoucký regions." The sale of new flats fell by half, "says Radek Polák, spokesman for Trigem. 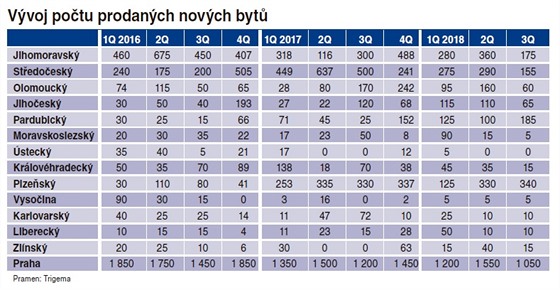 A particularly significant reduction in sales is in the metropolis of the South Moravian Region. "Sales of new flats in Brna are steadily declining. This year's data from January to September show a drop of 35 to 40 percent on an annual basis," says Alexei Veselý, executive director of Trikaya developer in Brno.

The disagreement between the buyer and seller's idea of ​​real estate prices means that apartments are selling less. "We are watching the slow, continuous decline in market activity this year. Freezing sales is taking place throughout the Czech Republic," Roček notes.

However, real estate experts do not expect this situation to affect the reduction in prices in the near future. To do something similar, this would require a truly crucial event.

"For a significant price correction of ten percent, it should be something really big, like the economic crisis. Adjustment of conditions by the CNB will not have such a strong impact," says Makovsky from Reality.iDNES.cz.

The fall in prices on the market is likely to appear first on more expensive real estate, such as apartments of large apartments available 4 + 1 and above. "We know from the past that bigger and more luxurious real estate will be the first. Owners have high expectations that are no longer transformed into a particular market," explains Hassman of Re / Max 4You.

Given the real estate price trend next year, most experts expect a general stagnation or a modest increase in growth in the largest cities. "We expect only in some places, as in the center of Prague or Brna," says Masin of Bidli's Reality. "I'm afraid that Prague will be on the bargain of real estate for some time," says Fojtik of Fincred Reality.

"Even Brno or Pilsen are known for their long inertial performance. If the economy continues to grow and these cities continue to grow, we expect a slight increase in the next year," adds Martin Fojtík.