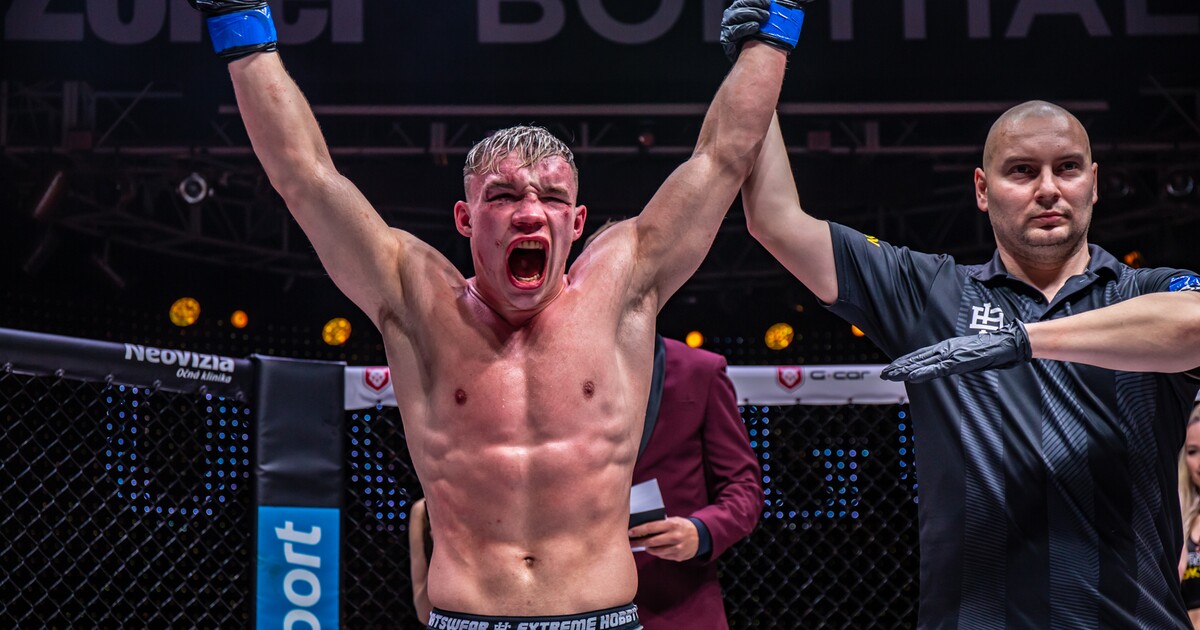 Eight members of the pyramid, one winner, 10 thousand euros. And little gloves. In that spirit was the free continuation of last year’s successful project The Octagon Underworld, which this time was given a subtitle The last man to stand. The attitude elite from the Czech Republic, Slovakia and abroad presented themselves at that, and in addition to the pyramid matches themselves, the fans witnessed the accompanying super fights, in which we saw local legends and young talents.

The gala evening was opened by the first of the prepared reserve fights Jan Pajtaš vs. Andrej Šimkulič. They took care of the fight full of sharp exchanges, followed by a successful knockdown at the end of the third round. Its author was Pajtaš, who sent Šimkulić to the ground hard right. However, the three rounds did not decide the winner according to the scoring judges, so it was out of the round.

The decisive moment here was Šimkulič’s knee, which is Pajtaše’s he struck a rib and the Czech fighter went to the ground. He was still getting up, but he couldn’t turn the match around anymore. In the end, Andrej Šimkulič was happy with the victory.

The second reserve fight belonged to Ladislav Krištůfek and Štefan Mészáros, and even in this case there was no lack of attractive spectacles. In the second round, Kristfek gave his opponent wonderful knockdown and the pace did not slow down in the last, third round either. We didn’t see the end before the limit, but we were waging a sensational battle. Ladislav Krištůfek left the winner with 3: 0 for points.

British bulldog Bailey Sugden and young star Vašek Sivák entered the first game of the pyramids. As expected, “Bad Boy” confirmed their position as favorites in this match and took a well-deserved 2-0 victory on points from the fight. He hit the defiant Briton with great shots, but he stopped everything and managed to fight back. He also tore Sivák’s right eye. But that was not enough to win.

An interesting moment occurred after the fight itself, when Vašek Sivák challenged Samuel “Gusar” Krištofič to a position match, who told him before the start of the tournament that he thought he was “overrated”. However, the fighters made up for this misunderstanding and there will be no conflict between fighters from completely different weight categories.

Although Sivák made it to the semi-finals, in the end he was unfortunately forced to withdraw from the pyramid due to an injured leg and stitches above his eye. He was replaced by Krištůfek in the semifinals

Michael Krčmáč and Ladislav Lengál. These were the names of the authors of the Second Battle of the Pyramids. There was no KO, but after three rounds the scoring judges had a very simple job and the 3-0 victory on points was obviously awarded by Michael Krčmář dominated throughout the match.

The first premature end of the evening brought Milan Paleš’s match with German fighter Carsten Ringler. The Slovak fighter sent his opponent in the second round to count and finished his job in the third round, when Ringler went to the ground again and his angle decided throw in the towel cage. Great performance on the side of Paleš.

Marc Dass Rey, who lost Marc Novák in the quarterfinals, lost fame and money from Spain. The shots from previous battles have been replaced by a fairly tactical and balanced battle, at the end of which hands after the victory 3: 0 body The Spaniard picked himself up. However, as viewers later learned, the Spaniard could not enter the semifinals due to an eye injury.

Andy Čechovský and Croatian Teo Mikelič became the actors of the first super fight. They exchanged punches in three rounds, at the end of which it was not entirely clear whether the referee would declare a winner or an additional round. One of the points finally drew the game, but the other two leaned to the side of the Croat who took the victory. 2: 0 body.

The only women’s match in the evening went to Victoria Bulínová, who accepted the fight at the last minute, and Klári Strnadová. The ladies gave nothing and the spectators had a look at another balanced battle. However, the scoring judges were clear about the winner – Klára Strnadová won 3-0, but her opponent Viktoria Bulínová also has the honor.

We had an extremely difficult knockout in the third super fight of the evening, in which Melvin Mané and Patrik Križan competed. The first of the nominees in the third round decided the match nicely outstretched right arm, who strikes Mané directly in the chin. He just jumped helplessly to the ground. Watch the video below.

The first semi-final fight was brought about by the conflict between Michael Krčmář and Ladislav Krištůfek, who replaced the wounded Vašek Sivko. Although Krčmář and Krištůfek were friends, this was not known in the cage and they certainly did not spare anything. Exactly the opposite. The uncompromising battle finally reached the last round, after which it ended the first finalist was Michael Krčmář.

The second finalist was decided by another semi-final match, in which Milan Paleš and Andrej Šimkulič met, who was a replacement for the injured Spaniard. However, “Minči” did not hesitate this time either, in the second round he managed to finish Šimkulič and thus secure the way to the dream final.

One of the main highlights of the evening was the match between Fabijan Fapš and Matěj Kozubovski. Fapshaw confirmed his nickname “Tank”, because he sent Kozubovski to the ground twice in the first round. However, the roles were somewhat exchanged in the second round, when Fapsho confidently avoided the blows of Kozubovski, who, however, finally hit him accurately, and the Slovak striker started counting.

In the third round, Kozubovský seemed to start taking the reins, but then Fapšo fired another solid right hand, after which Kozubovský was counted again. The Slovak “Tank” thus scored after an incredible battle 3-0 victory on points.

Tomáš Hron probably shouldn’t be introduced to martial arts fans. The local legend had over a hundred fights and competed with the almost 130-kilogram Serb Mitrić in the Last Man tournament. He was surprised at the beginning, when he sent Hron to the count with the first blow and thus confirmed the saying “He who bathes has a wound”.

However, Hron used his great experience, jumped out of the fall and I managed to hit Mitrić with precise shots. Both fighters stepped up the pace of the match until the third round, after which the scoring judges announced an additional round. Hron suffered a torn forehead, but still fought to the last second. However, two of the three scoring judges eventually declared the Serbian fighter the winner.

Fighting body posture scenes. He earned such a nickname before the tournament with the battle of two really famous names of Thai boxing – Vladimir Moravčík and Igor Daniš. However, the match did not last long. At the end of the first round, Moravčík hit Daniša with a precise left hand at the bottom and was defeated. Beautiful KO.

Then it was time for final pyramidwhich all the fans were waiting for. Milan Paleš and Michael Krčmář stood against each other, fighting for a prize of 10,000 euros. However, the expected match at the end of the first round was interrupted by an awkward one by pricking the eye, which was inadvertently committed by Krčmář and it was not clear until the last moment whether Paleš would be able to continue the fight. But he decided to continue.

The fighters reached the very bottom and put absolutely everything in their third match of the evening. An important moment happened in the third round, when Paleš sent Krčmář to count after hitting with his right hand, and thanks to that secured a 3-0 victory on points. Milan Paleš thus became the justified winner of the Last Man pyramid, and in addition to the big trophy, he also received a check for 10,000 euros.

The Octagon 22 is coming soon

One event is over and the other is approaching. The tournament will take place on March 27th Octagon 22, culminating in a title match between champion Carlos Vémola and Slovak challenger Milan Telatelinka. We will also see the battle of Samuel Krištofič with Alex Lohoré and many other interesting duels.