Al-Ahly will open its FIFA Club World Cup campaign against Qatar’s Al-Duhail in the quarterfinals of the tournament hosted by Qatar on February 4 and will continue until the 11th of the same month.

The match between Al-Ahly and Al-Duhail will take place on February 4 at the Education City Stadium, and the winner will face Bayern Munich, the European champions, in the semifinals of the tournament in August.

The City Education Stadium, which is one of eight stadiums to host the FIFA World Cup 2022 in Qatar, opened on September 3rd.

The stadium hosted its first official match on September 4, 2020, with the opening matches of the new Qatar League 2020/2021 season, where Al Sadd and Al Kharaitiyat met on the stadium pitch, whose readiness was announced in mid-June 2020.

The stadium also witnessed the celebration of Asia’s best player for 2019 and the star of the Qatari team Akram Afif, Al-Duhail striker, who was named the best player in the Qatar League last season, next to his colleague Tariq Salman, where the players of the two teams than Afif and Salman entered the field.

The stadium can accommodate about 40,000 fans and is only seven kilometers from the heart of Doha, and can be reached by subway.

The City Education Stadium will host six matches in the group stage of the 2022 World Cup, before meeting in the round of 16 and another in the quarterfinals.

The stadium is located in the heart of the Qatar Foundation for Education, Science and Community Development and has received the Global Sustainability Assessment System (GSAS) certification, becoming the first stadium for the 2022 World Cup awarded by the Gulf Research and Development Organization (GORD). five-star certificate. 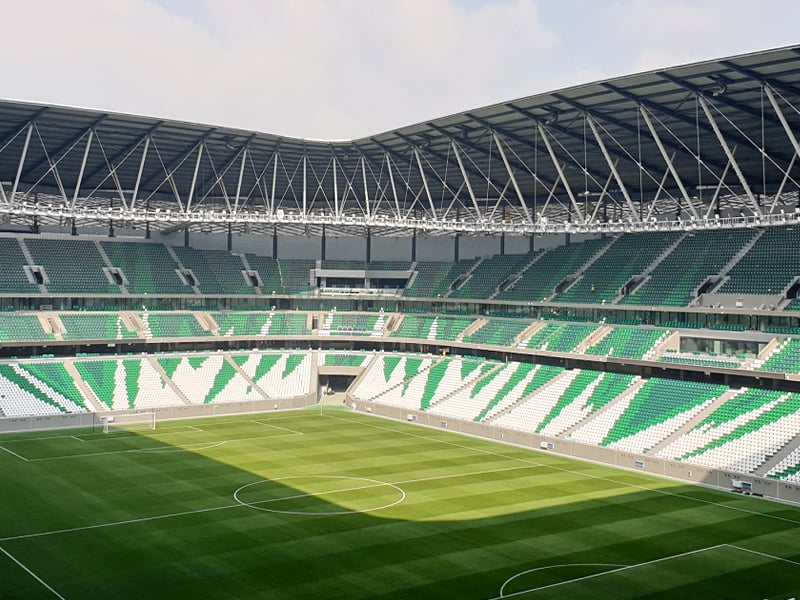