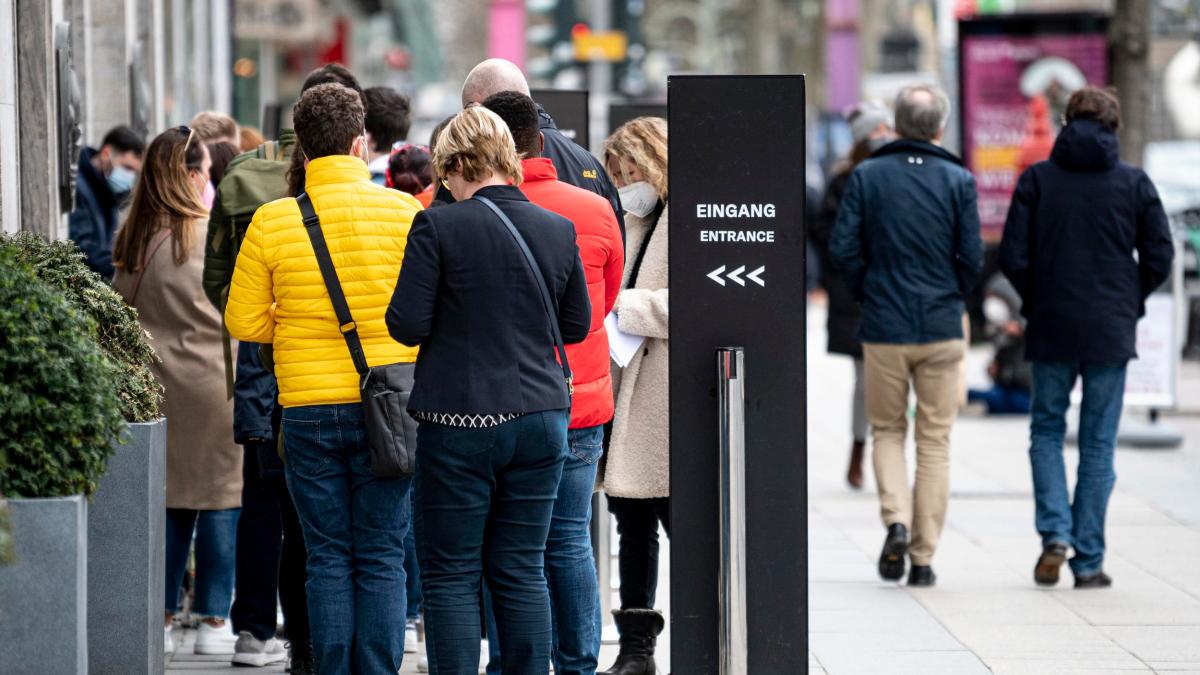 The consumer mood of German citizens is increasingly detached from the process of infection. Although retail is only open under strict conditions, consumers again want to spend more money – and not just online. Some experts fear costly side effects.

Dhe’s money there. The desire to spend it also grows. But how and where should this be done? More and more German consumers are stuck in this dilemma, if the development of the consumption barometer is followed.

The index published by the German Retail Association (HDE) rose in April for the second month in a row and 95.56 points almost reached the level of the previous year. The main reason for the increase in consumer mood is the growing consumer propensity to buy.

The Nuremberg Society for Consumer Research also reported a few weeks ago that the consumer climate is growing, although the recent sharp rise in the infection rate could not yet be included in these results. In that context, it is questionable whether the improvement of the consumer climate will continue, it was said at the time. GfK consumer expert Rolf Bürkl spoke about a possible “flash in the pan”. A renewed lock will seriously damage the consumer climate.

The HDE index now shows that German confidence has suffered less than feared as a result of the measures. “The decoupling of consumer sentiment from the contagion process can be seen even more clearly than the previous month,” the trade association notes. Objectively speaking, there is little reason to be in a good mood to buy.

Take a nasal swab, read the result on the test strip within 15 minutes and find out if you have Covid-19.

The current infection situation and new demands for tougher locking measures would rather be a barrier to consumption growth. “While there is still no prospect of a return to retail spending opportunities, the need for this seems to be very pronounced,” experts say, somewhat confused. As long as corona measures cause massive restrictions on spending options, consumers would not be able to live their positive consumer mood, the association fears.

For many consumers, online shopping is clearly not enough as a source of pure shopping pleasure. However, HDE expects a significant number of customers as soon as the store doors reopen. This shows the sub-index of purchasing preferences, which rose by more than five points in April to almost 103 points compared to March. For the first time since the start of the pandemic, the value is above comparable levels from the previous year.

Because locking forces consumers to inadvertently save for many months, financial resources are abundantly available for larger purchases. According to research by the IfW Institute for Economic Research, the narrowing of spending on everyday goods and e-commerce has resulted in additional purchasing power totaling 230 billion euros in German accounts. This corresponds to about twelve percent of annual consumer consumption.

According to the HDE study, there is currently a growing warning about rising inflation. So there’s talk of three percent at the end of the year. The Federal Bureau of Statistics has put the inflation rate for March 2021 in the initial estimate at 1.7 percent.

Retailers compete with other industries for consumer purchasing power

Not all consumer researchers share expectations of a rush of customers. The advisory board of Alix Partners assumes that the virus will permanently shape consumer behavior in Germany. In a representative survey, nearly two-thirds of respondents (61 percent) described themselves as “vaccination optimists”. They assume that vaccination will bring the pandemic to an end within a reasonable time.

But nearly half (44 percent) said they don’t want to change spending behavior in the future either. “We see that, contrary to popular belief, the pandemic is not just affected by the leisure and event sector,” said Peter Heckmann, a consumer expert at Alix Partners. Sectors such as clothing, footwear and consumer electronics have also suffered from the changes. The trend towards e-commerce will also continue.

HDE, on the other hand, assumes that the third corona wave only delayed the expected recovery, but did not cancel it. How much retail will benefit from increased willingness to spend remains to be seen, according to HDE. Dealers compete with tourism providers, caterers and cultural organizers, as well as the auto industry for the purchasing power of their customers.

The HDE consumption barometer appears monthly and is based on a survey of 2,000 people on purchasing preferences, savings, financial situation and other factors. The focus is on the expected mood in the next three months, so look to the future.

Buy a quick Corona test: here you can get a self-test at home – price, quantity