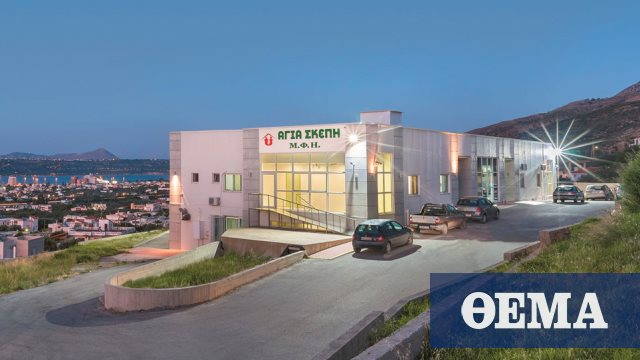 “Invisible” doctor from Chania, waiting list for hospitality in “nursing home of death“The abolition of banking secrecy and the disputed real estate transfers form the new framework for security investigations in the Agia Skepi case. at the Chania Nursing Home, as data states that all deaths have been recorded since 2009. The service is being investigated when the service started in “Agia Skepi.” There are probably hundreds of cases of elderly people who “went away” under mysterious conditions notes that there are deaths especially elevated compared to other units, prisoners usually stayed for several months, but at the same time there was a huge waiting list. “Maybe that’s the reason,” a security official said. “The fact that the cost of hospitality was very low compared to other nursing homes, and people are even received by Welfare, has resulted in the quality of services being commensurate with the cost.”

A key point in the investigations is the doctor who only last year signed all the deaths of 62 dead (that is, those who died in the unit, as well as other people, died in hospitals, after having previously gone through “Agia Skepi”), and the only cause of death was a heart attack. The data speaks of an “invisible” doctor with a minimal public presence of Chania, a small clientele and who never gave the right to comment. When the “Agia Skepi” case file was forwarded by the Chania First-Instance Prosecutor’s Office to a preliminary investigation on March 3, the police’s first move was to search for the death certificates of all elderly people who had passed through the nursing home. The investigation found that there are 24 cases from Chania’s registry office, and a total from all sides Crete the number rises to 68 deaths. Of these, 62 died in nursing home and another six days after leaving the unit. Police come to a nightmarish statement: cause of death and in all 68 cases heart failure was recorded, and the papers bear the signature of the same doctor-associate of a nursing home.

Immediately in the center of attention is the 45-year-old doctor “Dr. Death”, as analysts call her. They immediately gather information about his past, medical profile, relationship with the nursing home, and even about his property. They discover that this doctor was little known in the company of Chania. Especially quiet, without a presence in the local community and without, as they say, being considered a first-class name in the local medical community.

According to the property “From Agia Skepi“The specific doctor was one of the two doctors of the unit, but in reality he was the only doctor who rarely visited the facilities. This came from the testimony of former employees and current elderly guests, but mostly from the electronic archive of cameras the unit had. very few cases that he went to confirm the death of some food, hiding in many cases the real causes and writing, “Heart failure.” His police accounts, the money he received from the unit and his property were found under a police microscope.

Scenarios for what lies behind more than 68 deaths in 15 months in “Holy roof“But also hundreds of others have raged in recent years. Now their mouths are open and former employees of the unit speak openly in statements to police about harassment of the elderly and miserable living conditions. They are basically talking about leaving these weak people at their mercy, with minimal food and Scenes that make their daily lives unbearable and martyrdom … Miserable situations not appropriate in civilized countries Two former workers in nursing homes, witnesses to the first lawsuit of a lawyer’s family, even develop images reminiscent of the Middle Ages, and older prisoners they were tied up and malnourished.Helpless people, crumpled by time and tied to beds (most over the age of 85) who were even given large amounts of medication to keep them under control.

When asked by police what the benefit of owning a unit from the death of food and the creation of empty beds was, the answer was disarming: in this nursing home there was a huge waiting list of dozens of elderly people waiting their turn to be admitted to “Agia Skepi”. The reason was very low competitive prices that did not exceed 30 euros per day, while in the case of social welfare people the daily cost was less than 20 euros. It is characteristic that in 2009, when he started working, he had only 16 beds, today he has reached 50, and a total of 1,095 elderly people have passed through the years of his activity. Insurance Chania has seized all records of the nursing home, going back ten years, recording all deaths that have occurred since then, creating a second list of deaths with Agia Skepia inmates investigating cases one by one. It is worth noting that after the outbreak of the case of Fr. The nursing home is functioning normally, but it is empty because there are less than thirty of the 50 elderly people and the waiting list.

The basic tool in EL.AS research. is material collected by a team of police and medical examiners who carried out a surprising raid on a nursing home a month ago. Specifically, at 5 a.m. on March 22, police officers in the presence of prosecutors, medical examiners, and other authorities, who were recruited by the Prosecution to solve the mystery, made a cinematic reservation at the nursing home. With quick movements, they break down the door and enter to make a leaf and a pen. “Holy roof». The police team photographed the unit’s premises and the condition of the elderly, and all photographic material was sent for analysis and processing. The second group recorded in detail the conditions prevailing in all areas, talked to guests, while medical examiners examined all the elderly. The data show that what the police officers saw in the unit was not the best, while there are also photographs showing problematic living conditions in the area. It is a matter of time to process the material and reports of the doctors to be forwarded to the team investigating the case in order to, with unwavering assumptions, introduce the case file being formed and relating to his criminal offenses. “Creation and Involvement in Criminal Organization, Exposure, Physical Injuries to Weak Persons, and Murders Committed by Deceptive Failure and Successively.”

At the same time, another area from which the police are waiting for important answers concerns the financial part of the case.. Some of the complaints investigated by Asfalia speak of unusual real estate transfers and even disputes over donations. As a result, banking secrecy has been lifted and money laundering is being sought to determine if anything unusual is happening with the property that changed owners. They say the flow of money and even some notarial acts may indicate that something unusual has happened in some death cases. Thus, they are in-depth investigating this section to determine whether the seized illegal property, movable and immovable food of the unit. The possibility is considered that some of the elders had no heirs and that their deaths resulted from acts that were not justified.

It is characteristic that there was an unprecedented omerta in this unit, which is even because of him coronavirus took on enormous proportions. Almost every visit of elderly families and every contact were forbidden. They wanted, police say, to cut off all communication about food with their people.

“War” in hospitals: 1,248 patients with covid in units – A small decrease in the number of intubated

Reversible 7: Where and who “hit” to control AADE and SDOE