Work hard in Chhattisgarh, Delhi is not on the agenda, Raman Singh says 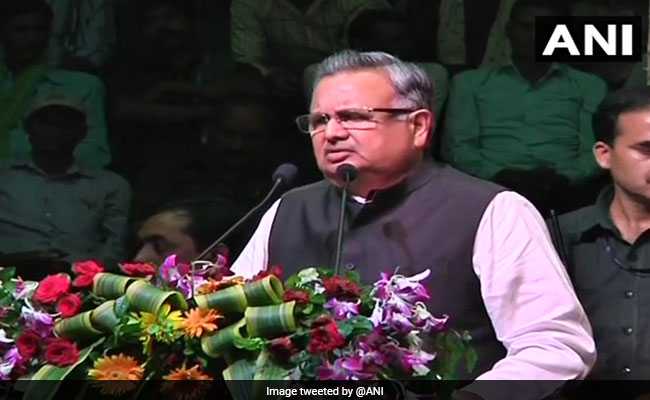 Dr. Raman Singh, who has ruled Chhattisgarh for the record 15 years in his 18-year history, feels he still has a lot of work in the state, and Delhi is far from him for now.

Mr. Singh said that he was fully satisfied with his three terms as the Chief Minister and that he received much love from the people of the state.

"From now on, I believe that" Dilli vrata hai "(Delhi is far away). It is my pleasure to work here in Chhattisgarh and here's a lot to work," Singh said in an interview with PTI.

He responded to questions about the role he sees in the next phase of his political career and whether to include the transition to Delhi for the national level.

In some quarters there was talk that Singh and several other senior BJP leaders from various states could be transferred to the Center, although there was no official word about the ruling party or its top leaders.

The 66-year-old veteran of the BJP, who was practically an ayurvedic doctor before he drifted into politics in the 1980s, became Chief Minister of Chhattisgarh in December 2003 after the Saffron Party grabbed power from Congress only three years after the state was carved from Madhya Pradesh.

Prior to sending the BJP indictment against the then ruling Congress in Chhattisgarh in 2003, Singh served as a trade union minister at the then NDA government headed by Atal Bihari Vajpayee.

Leading bid of the BJP to retain power in Chhattisgarh at upcoming assembly elections, Singh said there was a wave of "pro-incumbency" in the state based on his government's actions in the agricultural sector and the effective functioning of the public distribution system.

Opposition leaders have spoken of a strong anti-incumbency cast against Singha.

Convinced in winning his fourth term as prime minister, Singh said that state investigations could affect Loka's election next year, but there should be no referendum on the government of Narendra Modi at the Center.

State elections became more interesting in the direct struggle between the ruling BJP and the Congress in at least three of these five states.

Among the five states, Chhattisgarh is the first to go to polling stations in multi-stage voting. Voting will be held for a total of 18 seats in the Chhattisgarh Assembly in the first phase of November 12, including for his own constituency Mr. Singha, while the remaining 72 seats in the country will go to the polls in the second phase on November 20th.

In Chhattisgarh, Madhya Pradesh and Rajasthan, the ruling BJP is directly opposed to Congress, even when the presence of Alliance Party Bahujan Samaj under Mayawat with former Prime Minister Chhattisgarh Ajit Jogi's bid made the contest more interesting in that country. In addition, the congressional plan to build a broad anti-BJP federation failed to fully grow in all polling states.

Prime Minister Modi received a large majority in October 2014 and Chhattisgarh, Madhya Pradesh and Rajasthan were among the countries where the BJP won a great deal.

The prime minister said that one of his focal areas would be in the next term to establish complete peace in the Bastar region hit by the naxals.

With Naxal violence back to the center of attention, opposition leaders in their campaign meetings accuse Raman Singh government of failing on the security front.

Mr Singh said the anger for Naxals was still present in the Bastar region and his priority would be to ensure peace in the region if he was to vote again.

At Salwa Judo, Singh said the movement had emerged because of the anger between people at Naxals, who was still there, but such movements could not last long.

In 2011, the Supreme Court ordered the disintegration of the anti-Naxal force after calling it illegal and counter-insolvent.

Salma Judum mobilized in 2005 the late congressional leader Mahendra Karma, who was killed in Naxals in 2013 as a vigilant force against left-wing extremists.

While many described it as a spontaneous rise of tribes against violence in the Bastar region, there was a controversial reputation with allegations that the state administration supplied them with weapons and helped them to recruit unemployed locals as "special police officers". They are also accused of burning villages, attacking people and forcing them out of their homes.