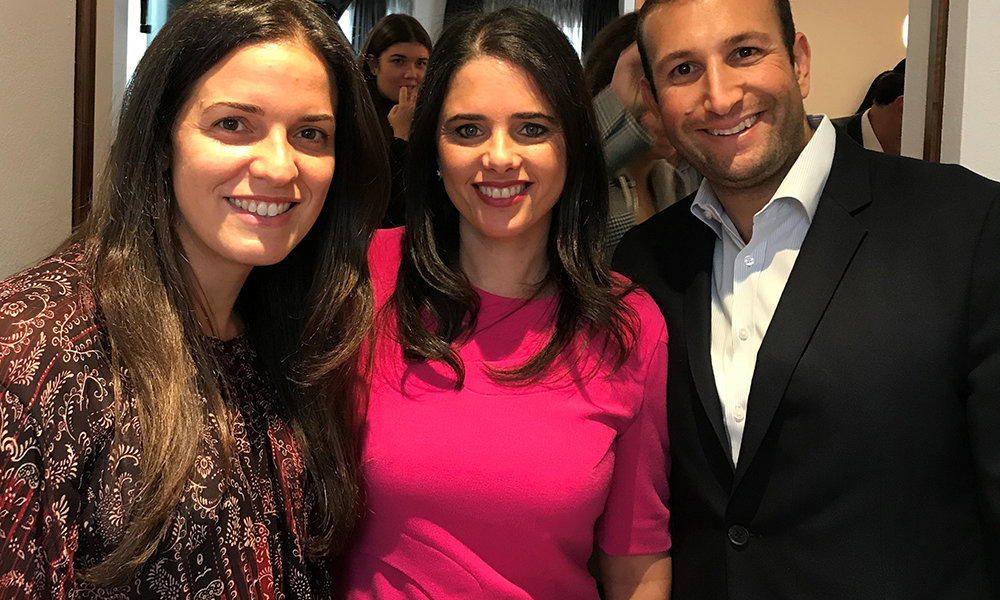 On October 28, the Sepharian community was honored to visit the current Justice Minister Ayelet Shaked at the Regina and Jack Ashkenazi. Recently elected as "the most prominent Israeli person," Shaked is considered to be "the most successful female politician in Asia from Gold Meir." As a Justice Minister since 2015, he has been the leader in reforming the activist courts and led to the creation of a more transparent and democratic branch of justice in Israel. Many recent initiatives are aimed at establishing the Jewish character of the State of Israel and determining the legal status of Judea and Samaria. She talked with the crowd about current events as well as the strategic goals of her initiatives. A short interview that was conducted before the event was played.

Dr. Murray Mizrachi [MM]: In the light of the terrible tragedy that took place in Pittsburgh, what message can the Americans take away?

Minister Ayelet Shaked [AS]: Great tragedy and the most brutal anti-Semitic attack in American history. We will not allow antisemites to win. Am Yisrael Hai. We need to take this moment to get rid of and emerge stronger than before.

[MM]: What inspired you to leave your career in the business world and invest in politics?

[AS]: I've always been passionate about politics. After my military service and university I worked in the Texas Instruments high tech industry. The pressure for me to go into politics was to leave Gaza in 2005.

[MM]: Do you see yourself as a central or right wing?

[AS]: I'm right wing. As such, I present myself and observe myself as a representative of the right-wing and conservative movement in Israel today.

[MM]: One of the biggest changes in the Israeli judicial system during your service was the appointment of hundreds of new judges. What was the impact?

[AS]: Judges give their values ​​and Hashkafat Olam [world view] in his own reign. By appointing conservative judges, we have created a more balanced and representative judiciary system that is better served to Israeli citizens.

[MM]: One of your main tasks as a Justice Minister was to suppress judicial activism. Why is this a threat to Israeli democracy?

[AS]: It is not a healthy indicator when the judicial branch starts the legislation. The Israeli public has elected its representatives and elected state officials through democratic elections. The uneducated judge who makes laws does not represent the will of the people.

[MM]: So why do critics claim that your reform is actually a threat to democracy?

[AS]: This is totally wrong and politically motivated criticism. Today, the Supreme Court of Israel is more diverse and improved than the last few years. Our courts are now better represented by the Israeli public, which in turn has created more confidence in the court process.

[MM]: What is the role of Halakcha [Jewish Law], if at all in Israeli law? Will it change in the future?

[AS]: Israel is modern democracy and rules to these principles. Halacha plays a role in certain laws. For example, in the law of marriage of our country, the Israeli law follows Halach. During my 3 years as a minister I allocated money to help educate judges and provide funds for Mishpat Ibri [the Hebrew/ Jewish Law]In many cases where the law is undefined, judges may rule against Mishpat Ibri. For thousands of years, our people have faithfully preserved our laws until they were applicable in our homeland. It would be most appropriate in such cases that judges point to and be aware of our tradition.

[MM]: Do you see an alternative to two state solutions?

[AS]: Do you know the definition of madness? Although I have always been against two state solutions, the state of Israel has been trying in the same process for almost 30 years. When we tried unilateral separation [from Gaza] and it was a disaster that led to the war and the exposition of hundreds of thousands of Israeli citizens with the threat of missiles and missiles.

[MM]: So what could be the final status of Judah and Samaria as the "Western Bank"?

[AS]: Our party chief Bayit Yehudi, Naftali Bennett, called for the annexation of Area C and the formation of the Arab Confederation of Regions B and C with Jordan. Area C has more than half a million Israeli citizens with 100 to 200 thousand Arabs. We can absorb this whole area in a democratic and effective way to apply our laws.