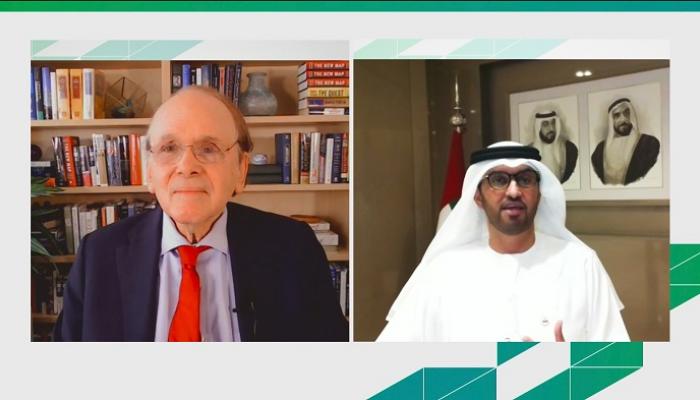 Dr. Sultan bin Ahmed Al Jaber, Minister of Industry and Advanced Technologies, CEO and CEO of the National Oil Company Abu Dhabi (ADNOC) and its group of companies, confirmed that low-carbon oil will play a major role in transforming the energy sector.

This happened during his participation in a virtual dialogue session as part of the activities of the energy week “Seera” on trends in the oil and gas sector and transformation in the energy sector, with the participation of Vicky Holope, CEO of “Oxy”.

Al-Jaber said during the dialogue session: “The UAE has important advantages that enable it to produce low-carbon oil and gas, and in this field we have two important advantages, the first is our wise leadership that puts environmental protection among its priorities, and the second is a natural feature that makes extracting our oil and gas resources the lowest in the world. In terms of carbon emissions. “

The Minister of Industry and Advanced Technologies explained that the UAE began preparing for the transformation in the energy sector 15 years ago, saying: “The UAE sees the transformation in the energy sector as an opportunity for diversification and economic development. During my work at Masdar, I participated in investment development in energy sources. ”Renewable energy projects in the UAE, and today the country has the three largest and most expensive solar energy projects in the world, along with large renewable energy projects in thirty countries around the world. world.”

He added, “The world will remain dependent on oil and gas for many decades to come, and therefore our mission at ADNOC is to work on responsible oil and gas production.”

He noted that ADNOC is working to implement its growth plans with a commitment to reducing carbon emissions by an additional 25% over the next ten years, adding that the company is exploring opportunities and potentials in new fuels, such as hydrogen, which has shown great and promising potential as a carbon-free fuel. can mass production as part of the existing ADNOC value chain for hydrocarbons.

“ADNOC continues to work on business opportunities that will strengthen the UAE’s leading position in the energy sector through a diverse and integrated combination of energy sources,” he said.

In response to a moderator’s question, Pulitzer Prize-winning economist Dr. IHS and vice president of the IHS market, on climate change, Al Jaber stressed that the UAE continues its pioneering role in the region to boost global climate change efforts and encourage this direction as the first country.In the region that signed the Paris Agreement on Climate Change.

The CEO of ADNOC reviewed the importance of capturing, using and storing carbon dioxide in tackling the phenomenon of climate change, noting that ADNOC foresaw the major change this technology could make in the energy sector four years ago when it built the first and largest industrial industry. facility intended for this purpose in the region.

He said, “It is not possible to achieve global climate change goals without expanding carbon capture, reuse and storage technology, not only in the oil and gas sector but also in various sectors. I therefore see an important role for this technology in sectors that need large energy sources. and which are difficult for them. By reducing carbon emissions such as heavy industry and chemicals, and ADNOC is ready to work with partners inside and outside the oil and gas sector to expand the scope and adoption of carbon capture technologies. ”

Al-Jaber re-examined his view of the economic outlook, expressing optimism and explaining the double positive effect of the Covid-19 virus vaccination program and the economic stimulus program implemented by governments around the world.

The CEO of ADNOC said: “Now with the start of vaccine availability in various parts of the world, the situation in 2021 looks more positive. Here in the UAE, we are implementing a successful vaccination program against the Covid-19 virus, as we have approached the vaccination of 50% of the country’s population through more than six million doses of vaccine, the second highest rate in the world. ”

He added, “Vaccines are one factor in economic recovery, while another factor is putting the wheels of economic activity back in rotation. As part of efforts to respond to this pandemic, governments around the world continue to provide unprecedented incentive packages, and more are expected. The most important thing here is to be warned about the risks. “Economic inflation”.

He expected that the economy of the United States, which is a major player in the global economy, will return to achieving GDP growth at levels similar to those before the pandemic, by the end of this year, and that this growth will continue in 2022.

He noted that these developments mean a strong recovery in oil demand compared to the lowest levels of demand during the pandemic, in which the world consumed 75 million barrels a day. He said, “Given the current average oil consumption, which is 95 million barrels per day, global oil demand is expected to rise to a higher level than before the Covid-19 later this year.”

The CEO of ADNOC stressed the need to focus in the oil and gas sector on what can be controlled, and that is cost reduction, pointing out that ADNOC applied this vision during the paradigm shift it made.

He said: “This approach has been one of the main pillars of the ADNOC paradigm shift over the last five years thanks to the vision, guidance and support of wise leadership. During this period we have focused on improving performance, increasing flexibility and competitiveness and raising operational efficiency in various areas and phases of our business.

“We at ADNOC are convinced that advanced technology is a key element in increasing efficiency. For example, by developing the business of ADNOC Drilling, the largest drilling company in the region, we have been able to increase efficiency by more than 35%, which has significantly reduced efficiency, ”he added. Costs”.

He added, “ADNOC has continued to focus on increasing the efficiency of capital recruitment by strengthening the proactive management of our asset and resource portfolio, while continuing to attract foreign direct investment that benefits from a reliable and stable business system in the UAE.”

He explained that ensuring competitiveness in the current business environment requires maintaining low production costs. Therefore, our focus continues on the means and methods that allow us to strengthen our position among the companies with the lowest cost of crude oil production in the world.

Significantly, Seera Energy Week, which will hypothetically take place from 1 to 5 March 2021, brings together an elite group of thought leaders and decision-makers in the fields of energy, technology, business, government and finance to exchange views and views on many current issues in the field of energy and formulate its future vision.