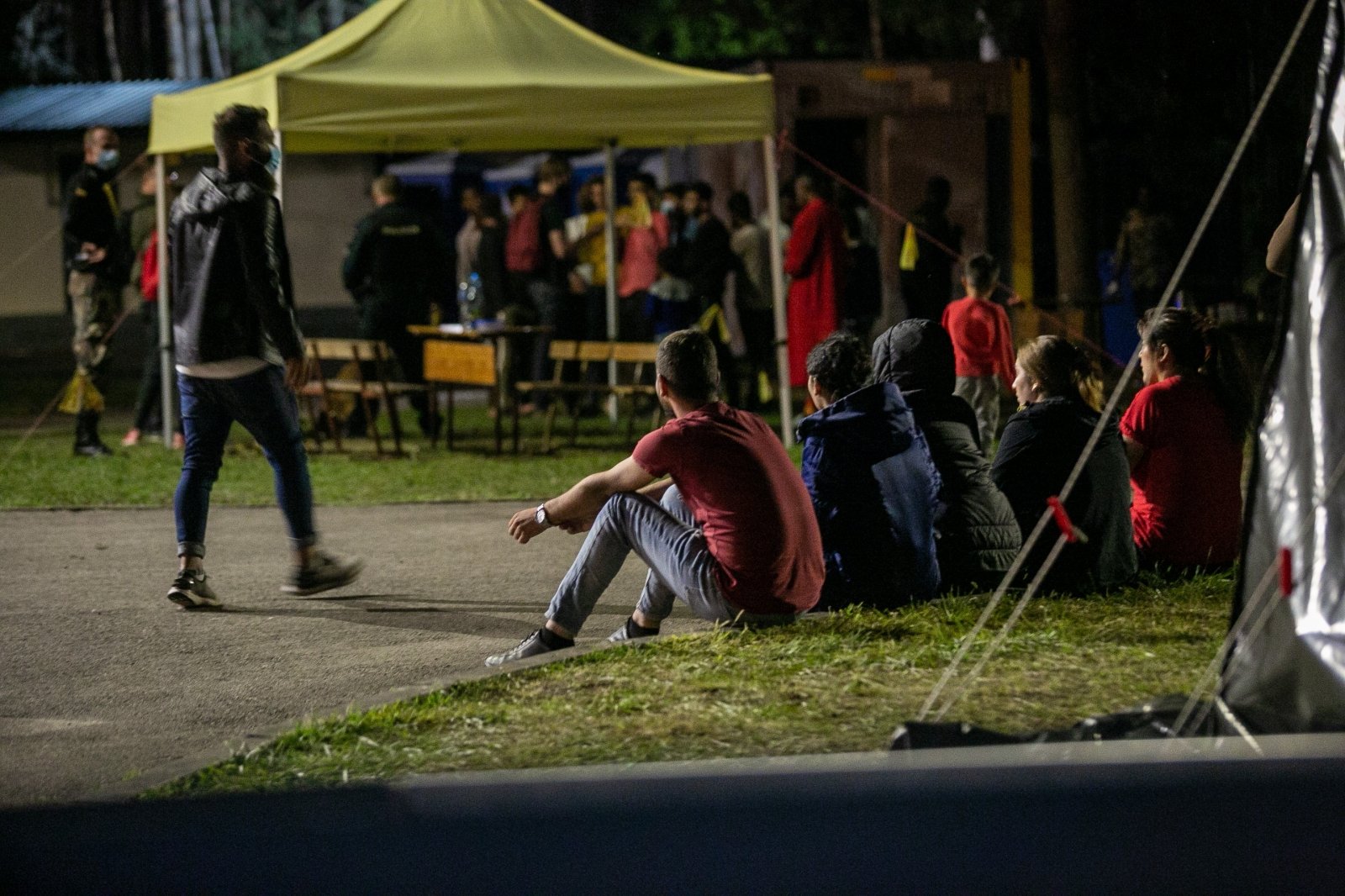 In front of the young men is stacked their modest luggage, three have only bags of clothes, the others have small backpacks. Everyone looks scared, it looks like they will turn around soon.

“They are very scared in Belarus, some have said they are taking things away, still beating them and pushing them across the border,” I have heard many times from our border guards about such cruel treatment by neighbors who started hybrid aggression.

You want to play football

Most of the detained visitors claim that they do not speak English. But border guards say they are just silent at first and speak boldly. I manage to talk to the young man. 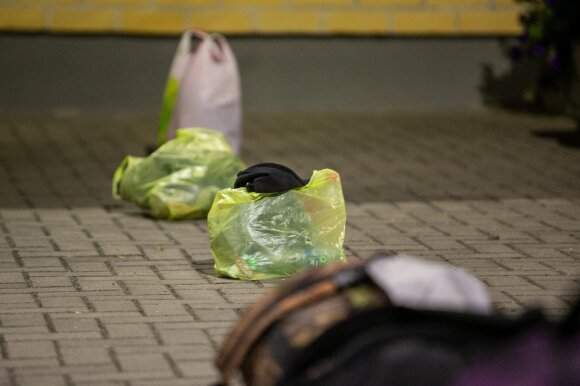 When asked what he is fleeing from and why he feels insecure, the 26-year-old from Sierra Leone begins to tell the story of the political instability in the country.

“My father belonged to the opposition party, which killed him during the election. My family was persecuted, so my uncle bought me a ticket to Minsk so I could get asylum in the European Union,” he tells the story so coldly and quickly that he can get the impression not to talk about his life, but to recite a well-learned poem.

That such stories usually do not prove to be confirmed is also shown by the already examined reports of migrants – so far none of them has received refugee status in Lithuania.

The interlocutor explains that he would be happy if he stayed in Lithuania and, if the opportunity arose, traveled to Germany. The most important thing is to be in the Schengen area. When asked what he would do here, the migrant answered wanting to use his talents.

“I want to play football. If I find a good team and coach here, I will be able to use my talent, sign a contract and get paid, ”he explains. True, he did not play football professionally in his homeland, but he is convinced that it is not too late for him to reach heights.

The guy says he has not seen any officials and has not faced obstacles when crossing the border in Belarus.

As he talks to the future footballer, Ali himself, who crossed the border illegally a few weeks ago, convinces other newcomers. Since no one has a passport with them, learning 5 languages ​​Ali helps border guards to communicate and collect information about newcomers – names, dates of birth and countries of origin. 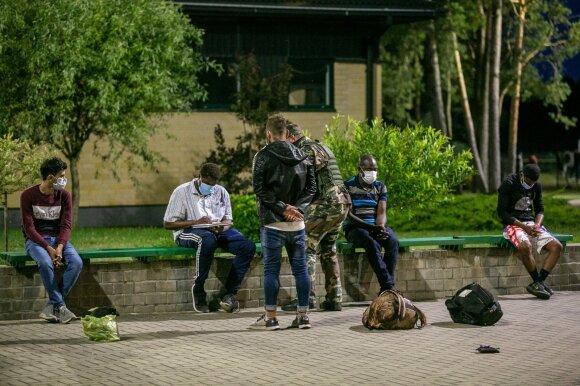 “Then we just noticed it. The coronavirus tests had to be taken by Africans, it was impossible to talk to them, But he came and put them all together in three minutes,” one official said of the irreplaceable helper.

“Then we just noticed. Do you know why? They like the system and they see that I take the system seriously – But he walks towards the city with tents. – If bad people come here, we throw them out because they scream and plan something bad. I have a secret team of 6 people who speak different languages. They monitor everything, gather information if someone plans to attack the police or jump the fence. I have two bodyguards if someone is dissatisfied with my job and wants to attack me. “

If bad people come in here, we’ll throw them away because they’re screaming and planning something bad. I have a secret team of 6 people who speak different languages. They monitor everything, gather information if someone plans to attack police officers or jump the fence. I have two bodyguards if someone is unhappy with my job and wants to attack me. ”

It shows where over a hundred migrants live: people dancing, talking, playing football. They are constantly monitored by at least a few guards.

According to Ali, if someone is planning to fight or cause any problems, he finds out in advance and prevents it.

“I work a lot of hours, I don’t relax, I don’t sleep much. If someone attacks the guards, escapes, it would be bad for everyone, both for asylum seekers and for officials. Then we will fall. So I make sure everyone is careful. We need a system, we love the system because we don’t have it at home “, says the interlocutor.

Asked about camp residents, Ali hints that the problems come from immigrants from Africa. But he asked to say more, he thinks.

“Africans are different. I don’t want to talk about it … just, no comments. But they listen to me. I’m sorry, I won’t talk about it,” he replies. 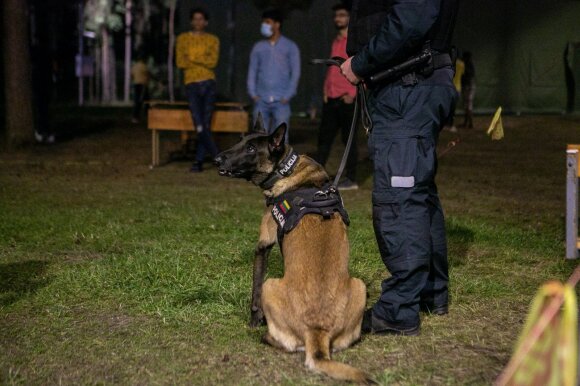 Border guards confirm that there is truth in Ali’s words. Migrants from Africa live in a mess, garbage everywhere, but when he leaves Ali immediately gets up and listens to him.

The informal migrant leader himself says that he has been living in Europe for several years, is married to a Finn and has a child. However, in Finland, someone was shown that their marriage was fabricated, so they were deported back to Baghdad. The question of why he chose the trip back to Europe via Lithuania makes his interlocutor laugh.

“You are smart, you are not children, you understand everything. Because Lukashenko opened the border. Lukashenko told the news. Just get a visa and fly out of Baghdad. From Minsk for 7 thousand. euros can take you to Germany. I went alone because I know everything, I know the tickets. That was not the case before: you were imprisoned in Belarus, screaming, hitting, killing. There is no good country there, there is a dictatorship. But not anymore. Now you can just go, ”says Ali.

You are smart, you are not children, you understand everything. Because Lukashenko opened the border. Lukashenko told the news. Just get a visa and fly out of Baghdad. From Minsk for 7 thousand. euros can take you to Germany. I went alone because I know everything, I know the tickets. That was not the case before: you were imprisoned in Belarus, screaming, hitting, killing. There is no good country there, there is a dictatorship. But not anymore. Now you can just go.

An avalanche of complaints

Soon other residents of the camp gathered, a platoon of several dozen people who told of their problems. Their dissatisfaction with the situation is growing daily.

“There’s a mess here, we don’t have phones, our families haven’t known anything about us for 15 days,” the young Iraqi says with tears in his eyes. – Same food every day. There is no toilet, we only have cold water. Guys can’t smoke. We don’t have clothes, we have the same clothes, we have to wash them every day. We need your help from other countries, we are refugees. “ 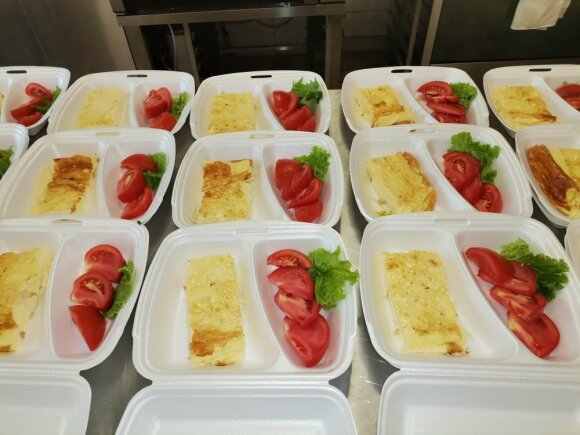 However, the author of these lines could see with his own eyes that all this was not true. At least tidy toilets and showers for migrants are provided. 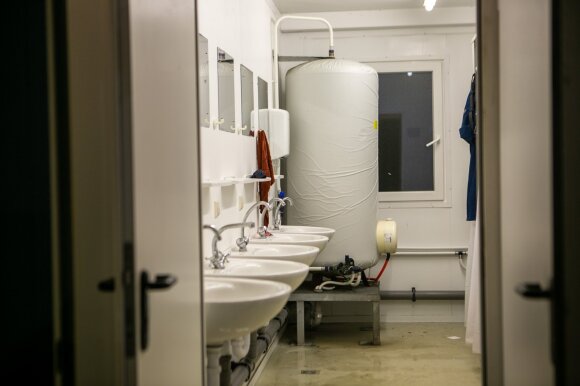 Another guy first thanked Lithuania for receiving them here, but explained that they were not well taken care of.

“We know that there is no good situation in Lithuania itself. But we hope the government is better, we want more. We are grateful to the Lithuanian government, but we want better conditions if we could,” he said.

Border guards hear most migrants talk about their great love for Lithuania, but they no longer believe in their sincerity.

“Come, say, we love Lithuania, we want to be here, and the next day we will find out that the same people are in custody trying to cross the border with Poland,” the official said.

But it confirms that the mood in the camp is getting more and more tense.

“We just noticed it then. They don’t think it’s a free country here. It doesn’t look like peace. Even prison is better. You can at least use the phone there. We were missed here. But we’re waiting. Maybe something good will happen soon,” he smiled. se.

People feel bad. They don’t think there is free land here. It doesn’t look like peace. Even prison is better. You can at least use the phone there. We were missed here. But we are waiting. Maybe something good will happen soon.

We visit the Švendubrė border station, where another tent city is now located. It is quiet here at night, only loud snoring can be heard from the tent. 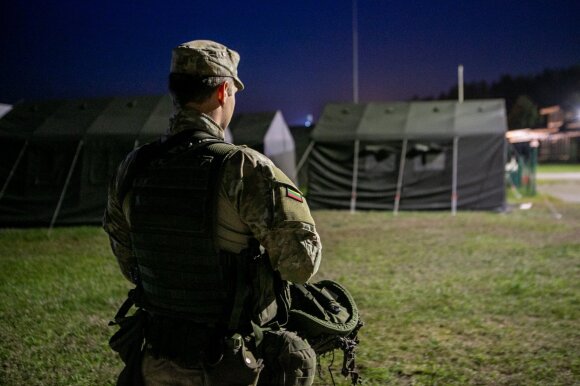 So far, the main task of the border guards has been to catch the smuggling of Nerimi, disguised in ice.

Upon arrival, 6 migrants are brought in who were detained tonight. Newcomers get new pull-out beds, sleeping bags that haven’t been unpacked yet,

When asked how much space is left here, the border guard points to zero. If even more visitors cross the border at night, where they will be accommodated is unknown. 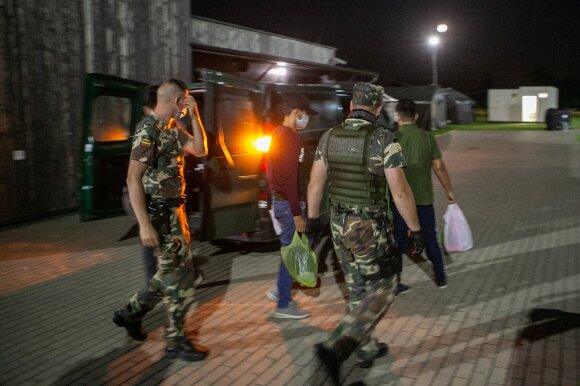 Another threat is the detention of a Chechen group. They sought asylum saying they were gay and could not stay in the homeland.

So far they are not aggressive, but they should be kept separate from other immigrants because conflicts would be almost inevitable. If we saw an even greater influx of Chechens, the threats would become extremely serious.

It is strictly forbidden to use the information published by DELFI on other websites, in the media or elsewhere, or to distribute our material in any form without consent, and if consent has been obtained, it is necessary to cite DELFI as a source.