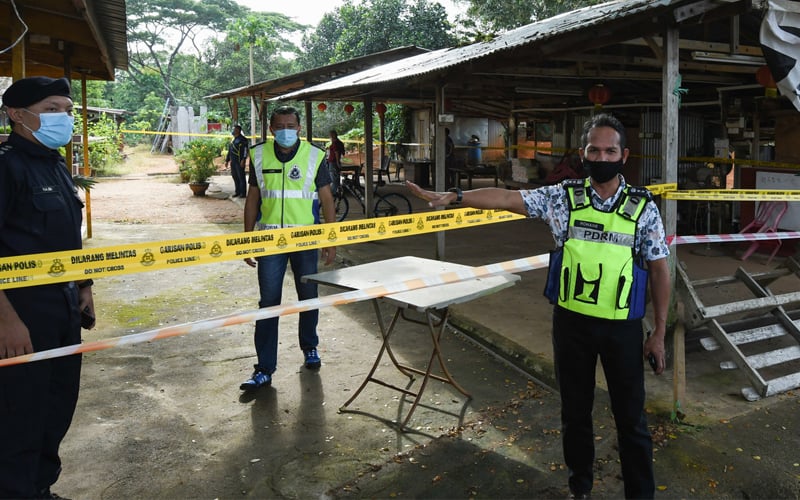 MARANG: Deputy President Rukun Tetangga was killed and a nephew was seriously injured after he was shot by a close friend this afternoon in an incident at the Rukun Tetangga hut in Taman Raya Wakaf Tapai.

In an incident that took place around 2pm, Fong Swee Fuan, 65, who was also the vice president of Wakaf Tapai RT, was killed on the spot while his nephew Teo Hock Beng, 45, sustained serious chest injuries.

Terengganu Police Chief Rohaimi Md Isa said police received information about the incident around 2pm and that a police team rushed to the scene.

“Preliminary investigations have revealed that the 57-year-old suspect twice fired a rifle, believed to have belonged to the People’s Volunteer Corps (Rela), twice in the direction of the two victims.

“Before fleeing the scene, the suspect issued a warning that he had 75 bullets and would kill more people before committing suicide,” he said when reporters met him at the crime scene.

Rohaimi said the suspect, a member of Rela, escaped in all-wheel drive, but that police arrested him in an area near the Durian Mentangau farm, Dungun today around 4:20 p.m. The weapons used to shoot both victims were seized.

“For now, we do not know the real motive behind the incident, and based on the information we received, the suspect and the victim were good friends and stayed in the same residential area,” he said, adding that the case is being investigated under Article 302 of the Criminal Code.

He said Swee Fuan’s body was brought to Hulu Terengganu Hospital while Hock Beng was being treated there.

Meanwhile, the deceased’s brother, Fong Swee Heng, 59, said that when the shooting happened, he was in a store near the residential area and that residents had informed him of the incident.

“While I was in the store I heard two loud explosions. I thought they were fireworks, but it turned out to be shots. When I knew my brother had been shot, I rushed to the scene and ran into the suspect along the way. He told me that he shot my brother before he fled, “he told reporters.

When he arrived at the scene, he discovered that his brother had died while his nephew was lying injured.