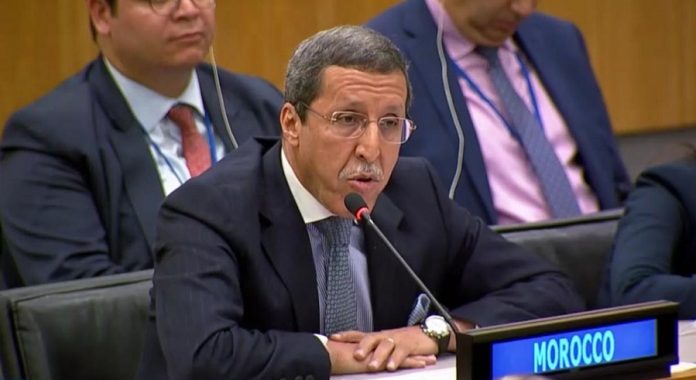 In a letter to Security Council President Barbara Woodward, the UK’s ambassador to the United Nations, Omar Hilale, Morocco’s ambassador to the UN, the situation in Moroccan Sahara was “far better” at all levels in South Africa, a country that supports false allegations of “polysaria” on the provinces of southern Morocco and which “persists in its political instrumentalization of the Security Council” on this subject.

“The Kingdom of Morocco strongly condemns South Africa’s appropriation of the false lexicon of the armed separatist group‘ polisario ’in its letter to the Security Council of 18 February 2021 regarding the situation in the Moroccan Sahara,” Hilale wrote.

“With all due respect to the South African mission, political emancipation, socio-economic development and respect for human rights in the Moroccan Sahara are far better than in South Africa,” the Moroccan ambassador insisted in a letter delivered to Council members and published as an official document. .

He therefore condemned the fact that once again the permanent mission of South Africa to the UN “persists in its political instrumentalization of the Security Council, by sending a letter to the pseudo-president”, a fictitious entity, and making it false allegations about the situation in Moroccan Sahara.

“In this regard, the Kingdom of Morocco wishes to reiterate that South Africa’s insistence on seducing the Security Council does not and will not change the fact that the United Nations in all its constituents does not allow any recognition, either de facto or juror, of this puppet entity or to its so-called president, ”Hilale said.

And emphasize that this stubbornness in the desire to instill the political propaganda of this entity, “greatly discredits South Africa, which wants to present itself as a responsible actor and a credible interlocutor of the international community, especially in Africa.”

Likewise, by endorsing the usurpation of office by this imaginary “president,” who is in fact only a despotic “leader” of an armed separatist group, South Africa is acting in flagrant violation of rules, procedures and regulations. the work of the Security Council, as well as the letter and spirit of United Nations resolutions and decisions, the ambassador said.

Moreover, South Africa is not unaware that the so-called “president” of this fictional entity is the subject of an arrest warrant for the Spanish national public for torture, inhuman treatment, rape and serious human rights violations, he recalled, adding that “despite his repeated attempts to give him legitimacy , neither this torturer from the Tindouf camp, nor his so-called Tindouf “republic” were, are not and will never be interlocutors of the United Nations “.

Hilale also informed the Council President that he had sent a letter to the UN Secretary-General and members of the Security Council, exposing false allegations from the South African mission’s letter on the situation in the Moroccan Sahara.