Bad weather is heading north after it has brought snow, heavy rain and falling off the south of the island 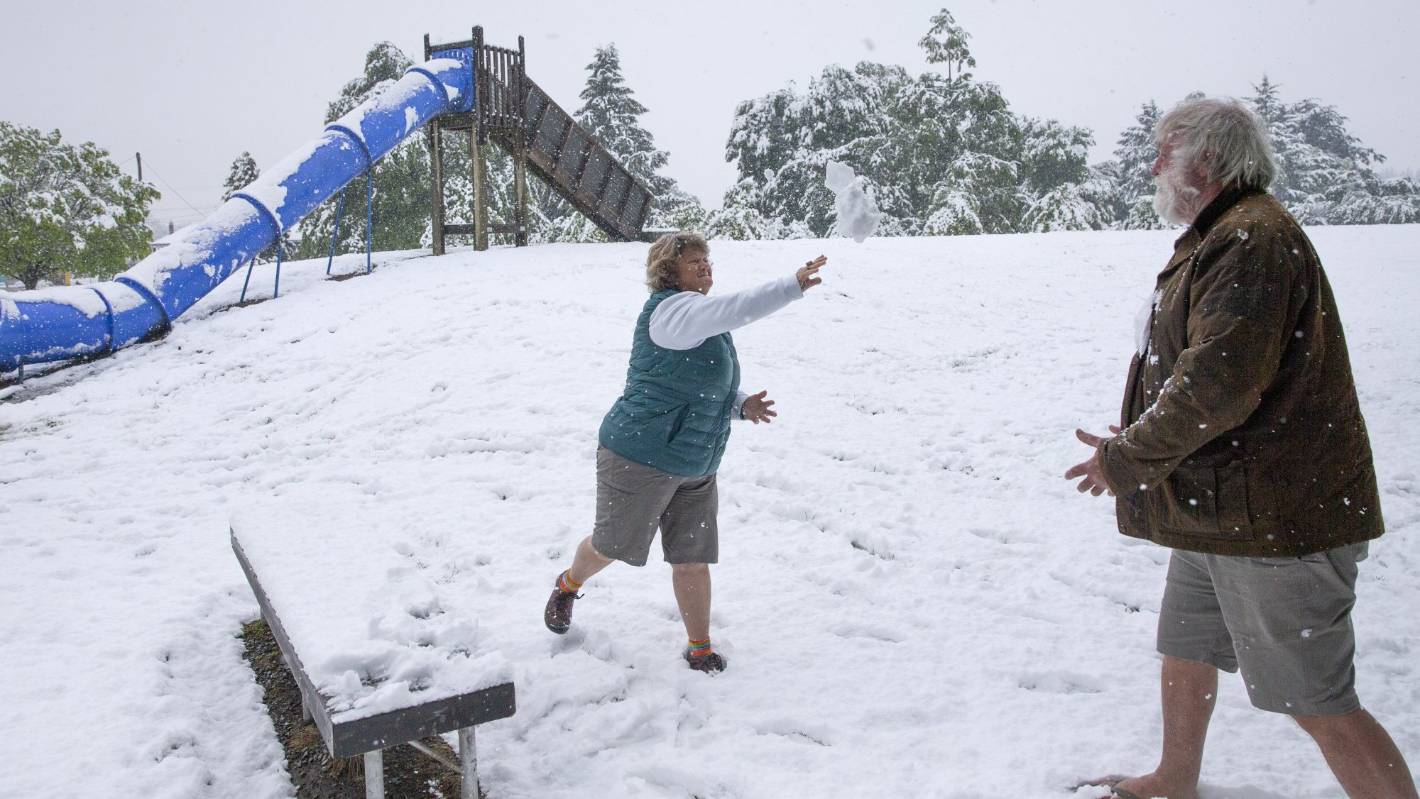 The front abundant with heavy rain and snow on most of the South Island moves across the North Island, but the time is better.

The key freeway between Canterbury and the west coast was closed after washing in the slopes on Thursday and Friday and will remain closed during the weekend.

Time also closed several roads and schools in southern Canterbury, Timaru, which received over average monthly rain in less than 48 hours, and Fairlie gets decent snowing.

The soaring water passes by highway between Franz Josef and Harihar on the west coast of the South Island.

Send us stunning photos and videos to [email protected]

In the midst of stormy weather, the Rejoice Stedfast body was found in the rushing river of Haupiri on the west coast on Friday morning. The strong, of the Gloriavale community, was a mother of 11 and fell into the river when the bank stopped smoking.

READ MORE: The bridge on the highway is washed, the students are stranded

The front that made the heavy weather conditions on the central and southern New Zealand began to move northward across the North Island and gradually weaken.

Meteorologist Ravi Kendule said, "There is a high pressure system in the west, gradually during tomorrow.

"Now the north opens the front, and the southern island mostly cleans from rain to showering regimes. It's still very cloudy, but tomorrow will begin to fall apart during the day.

"But important, the next two days after this system went through the night and early in the morning, we see quite a good time for most of the populated areas."

Access to the Goat Creek Bridge on State Highway 73 was washed as a heavy rain on the west coast.

WASHOUT ON THE PASSPORT

The NZ Transport Agency said that State Highway 73 would remain closed between Arthur's Pass and Jackson until mid-Monday.

An alternative route is available via the Lewis Pass (SH7). The driver is recommended for a further 90 minutes.

"It's still very big as it was built. The bridge was built on the curve at the top of the road climb … The camera angle adds to the optical illusion.

"The stream was shed through the carriage and it broke the resort that is exactly what it is intended for," he said.

Contractors should fill 5000 cubic meters to rebuild the road.

The rain fell on Friday afternoon, but the water level had to go down, Connors said.

Forewatch.co.nz forecaster Aaron Wilkinson said it was unusual for snow to fall to a low level for Canterbury's interior this time of year.

He said snow fell about 300 meters below the expected level of 700 meters above sea level.

"This is probably caused by a process called evaporative cooling and this is very rare."

Wilkinson said the cooling process of evaporation was so rare that this was only about five years ago.

The Porters Pass (SH73 between Springfield and Arthurs Passa) is closed due to snow. MetService expects the road until midnight.

"It's the best snow we've seen throughout the year," he said.

"We had a very tough winter … we have a very good coat everywhere."

The SH73 between Arthur's Pass and Jackson will remain closed at skinned weekend, with the following updates expected on Monday at 12 o'clock.

An alternative route is available via the Lewis Pass (SH7). Drivers are advised to have an additional 90 minutes.

The SH6 from Hokitika in Franz Josef was re-opened shortly after 16.30.

NZTA spokeswoman said that drivers should drive with extraordinary care and safe speeds, as the remains and surface floods still have impact on many road sections.

State Highway 1 on the shore of Kaikoura is open, but it is tracked.

The road was still open at 4.30 pm but was closed depending on weather conditions.

"We apologize for any inconvenience, and we urge people to be patient and to drive with extra caution." We are doing our best to re-open the road, adding time to your journey and being updated on the road conditions, "Connors said.

The Christchurch Operational Transport Center (CTOC) stated that there was a delay on the North Christchurch highway, while drivers slowed down watching the flooded Waimakariri river on Friday morning.

North Canterbury commanders went to social media to complain about the traffic in the creep. One driver said Things the water level was the highest seen in more than 20 years.

CTOC spokesman said there are no sealing plans over the Waimakariri River.

"The river level is high, but both bridges are perfectly safe".

Waimakariri District Council spokeswoman Alistair Gray said there was concern over the river's level, but on Friday afternoon it began to fall.

"As the rain starts to ease, the water levels drop. Both bridges are also very well used," he said.

No other major events related to weather or complaints were recorded in Waimakariri.

The snow was also hit mid-Canterbury on Friday by Fairlie, Burkes Pass and Tekapo.

Jenny Pawsey, from Coolgardie, near Burkes Passa in Mackenzie, said there were almost 70mm of rain on Thursday. When he woke up on Friday morning, he thought the rain stopped. But she looked out the window and saw the snow settled.

She was driving to Tekapo and said the road was dangerous. She realized that schools in the area were closed.

Volunteer Heartland Information Center Lloyd Harwood said he started snowing at Fairlie for about 7 hours and is still falling strongly until mid-morning.

"It seems to have been some more time yet," he said.

Wellington was also cold, gray, and very sombre, but escaped the worst of the weather.

MetService said 5.4 mm of rain fell by 16, and it is expected that about 3.3 mm will fall before midnight.

The northwestern seagulls who smoked the region on Friday were eased, but a serious wind warning remained in place for up to 20 hours.

The Northerlies were strong in some areas, and strong noises were possible for some time in the exposed places.