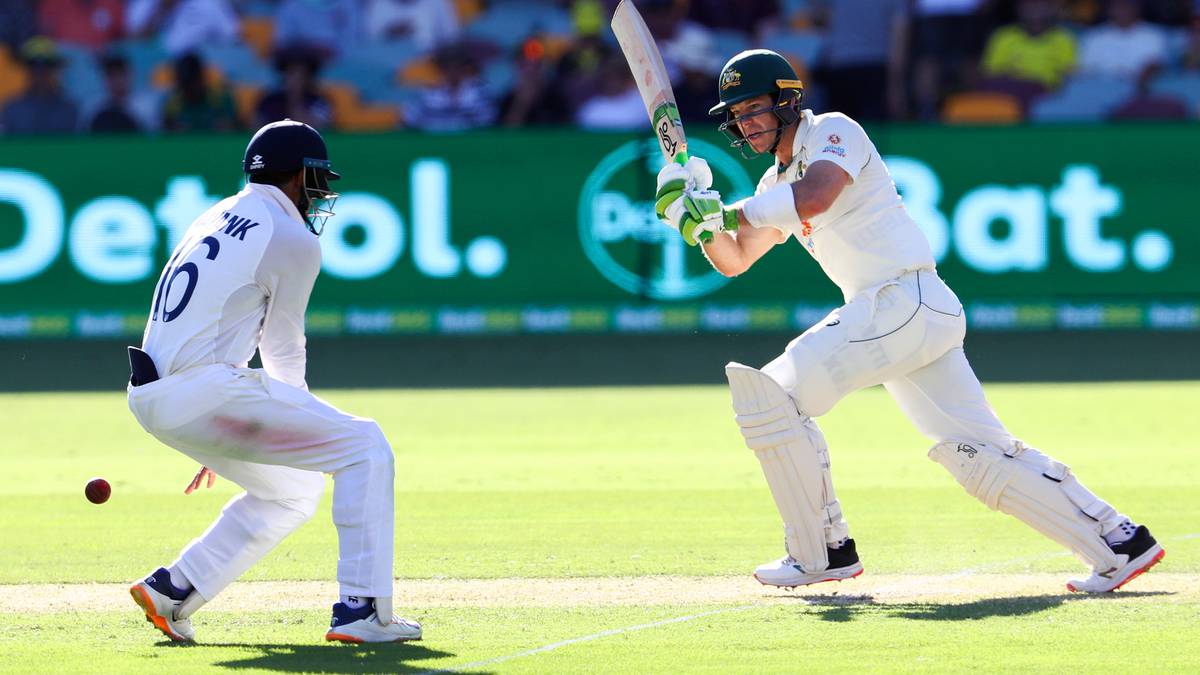 Thangarasu Natarajan arrived in Australia last November as the bowler of the Indian team, never expecting to shoot on his test debut Down Under.

He celebrated his rise from the reserve bowler to the most elite cricket level by taking a pair of key goalkeepers to bring Australia back to 274-5 on the opening day of the fourth decision test in the series at Gabba on Friday.

The 29-year-old left-hander played his first one-day international and his first international Twenty20 in December, and completed the complete format when he made his trial debut. It was the kind of chance for the last man after a series of bowler injuries culminated in the pace of javelin tip Jasper Bumrah who was ruled out of the match in Brisbane before tossing a coin on Friday.

With one ODI and three T20 internationals worth the experience, Natarajan went straight into action, sharing a new ball with Mohammed Siraj, who led a bowling attack that had a combined 10 test caps, after the Australians won the throw and decided to hit.

India had Australia in early trouble with 17-2 before Marnus Labuschagne amassed changes, announcing his fifth trial and splitting 70-year partnerships with Steve Smith (36) and 113 with Matthew Wade (45) to take the hosts to 200 -3 and on the edge of scoring acceleration. Then Natarayan struck twice, quickly, to slow the momentum.

Wade and Labuschange misjudged its length and tried to pull targets from the top edges. Wade was caught in the middle of the 13th round by Natarajan, and Labuschagne, after surviving a dropped catch of 37th and 48th, was finally ruled out by 108 after facing 204 deliveries, when he skipped one to goalkeeper Rishabha Panta in the 14th bowling alley.

Natarajan ended the day with numbers 2-63 out of 20 surplus.

Versatile Australia Cameron Green was undefeated on the 28th, and captain Tim Paine on the 38th, and he was not on the stump.

Gabba is a place where Australia has not lost a cricket test since 1988. But for the second day in a row, test cricket, India’s fierce, injured lineup has worried Australia.

The Indians overcame the entire final day on Monday in the third test in Sydney, losing just three goalkeepers, to save a draw and keep the series at 1-1 entering the final match.

The group that already missed injured veteran bowlers Umesh Yadav and Mohammed Shami and skipper Virat Kohli, who returned to India for the birth of their first child, the depth was still examined when Bumrah (abdominal muscles), Ravichandran Ashwin (back), Ravindra Jadeja thumb) and Hanuma Vihari (knee) were excluded for the Brisbane match.

Enter Natarajan and surrounded Washington Sundar on their first tests and recall Shardul Thakur and Mayank Agarwal. India only needs to draw on Gabby to keep the Border-Gavaskar trophy and have a relatively strong lineup to strike.

But inexperienced bowlers have shown they are here to win.

Siraj led the attack in just the third test performance and made a breakthrough in the first half when he had David Warner (one) on the second skate who was well caught by Rohit Sharma.

Thakur fired Marcus Harris (five) in the ninth, to score 17-2, which was his first test wicket – in his previous test he scored just 1.4 overs after suffering an injury.

Sundar also collected his first wicket – scoring it before he admitted to driving – when he caught the former Australian captain Smith in a short mid-wicket with the first ball in a post-lunch session after his morning spell featured three girl overs.

Australia could have been in deeper trouble, but head captain Ajinkya Rahane provided a routine opportunity to slash from Labuschagne when the hosts were 93-3.

That missed opportunity also favored hurdles for bowler Navdeep Saini, which kept him out of attack for the rest of the day.

Here’s how the first day went: