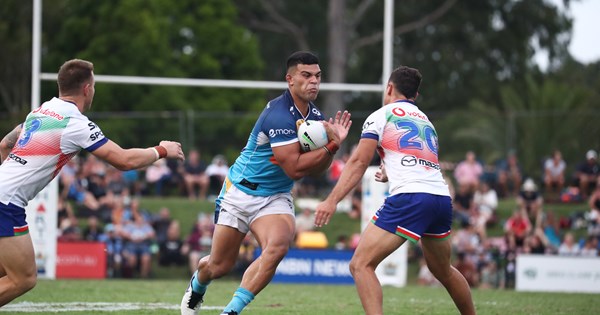 The new recruits brought a big smile to the face of Titan coach Justin Holbrook in Saturday’s trial against the Warriors, especially when he saw what Storm premiere winner Tino Fa’asuamaleuai could do with his head held high.

The Maroons striker gave all indications that he could be one of the buyers of the year as he created a 40-meter burst to score Titan’s introductory attempt in draw 12 for Oakes Oval in Lismore.

“He was great, wasn’t he? He trained so well for us – he trains like he plays so he was great,” Holbrook said.

“I thought Tino and AJ (Brimson) were really good so they would be perfect for us in the first round.”

The Warriors might not like the thought of trying to curb some of Titan’s stars, but they get another bite of that cherry when the two clubs meet on Sunday, March 13 in Gosford for the opening game of the 2021 season.

Brimson played his first game after breaking a bone and tearing ligaments in his left foot at the opening of Queensland in his home country of origin in Adelaide last November. He put his foot to the test early with a 20-meter line break.

Then there was the always imposing threat of another new rookie in David Fifiti, who made life difficult for Warriors stand-up half Sean O’Sullivan by switching over him several times.

“I was also very happy with Dave – and he’s going great,” Holbrook said.

“So given how all the players went and how the game went, I’m really happy with that. I thought there were a few really good signs for us here, without being brilliant.

“It was a good hit … and always a little awkward knowing we were playing them in two weeks, but I’m happy with what I saw.

“That was what we needed – we just need to play leg and now we’re going through everything we can look forward to in the first round.”

The Warriors also had some new product on display and the shine they had. Former Tigers and Panthers striker Ben Murdoch-Masila created a lot of space in the middle by giving momentum to his team. He returned from a five-year Super League with Salford and Warrington.

His rush to the mirrors was reflected by Tongan International and former Manly props Addin Fonua-Blake, who offered good minutes for coach Nathan Brown.

The Titans always looked menacingly early. Halfback Jamal Fogarty picked up where he started with Indigenous All Stars a week ago with quick hands and speed on the line.

The Warriors ’defense held tight, but when starting whore Wayde Egan left the field in the 15th minute with an elbow injury, it seemed like a turning point.

Fa’asuamaleuai scored in the next set before Jarrod Wallace gratefully accepted the addition of Anthony Don – a local NSW northern river product – to score for the Titans 12-0 three minutes later.

The Warriors finally made the record before halftime through second rower Josh Curran by breaking through the combined accessories of Mitch Rein and Brian Kelly.

At 12-6 at the break it was anyone’s game, but fatigue began to show in both teams.

Halfway through the second half Roger Tuivasa-Sheck began his farewell NRL tour with a traditional bust, after the Titans ceded half to Ash Taylor.

Support was followed by Kodi Nikorima and Jazz Tevaga, and Tevaga finished. That locked the score at 12-12 with a quarter of a game.

The Titans pressed hard in the final without an award, despite former warrior Patrick Herbert going three inches from the goals scored against his old teammates.

But without a golden point in the trial games, the ball game remained tied.