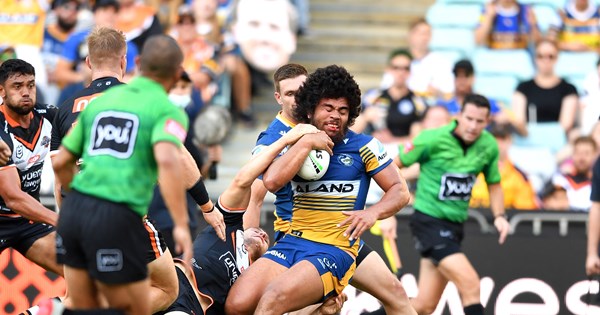 Brad Arthur predicted that Blake Ferguson would be the target of the Wests Tigers the moment he dropped his first high ball, but he praised the veteran for his efforts to win late in the 36-22 win.

Ferguson’s afternoon began amusingly, slipping on Eels’ wing trying to collect a shot, before the trembling efforts under the high ball led to two errors.

“Those were great punches, but he reacted well and he just had to move on from that, there’s nothing he can do about it,” Arthur said of Ferguson’s mistakes early on.

“It was an attempt and he had to move on. He did well in the second half.

“We knew that once he dropped that ball, he would keep coming that way, and he just had to, because he dropped one, it doesn’t mean he’ll keep dropping them. He knows how to catch a pawn. He’s a very good winger so he’s did his job “.

The eels looked at the cruise control and led until the middle of the second half until 14, but the home team enjoyed the weight of the possession and with two attempts rushed to the home and set the finish of the stand.

Be familiar: The third moments of round 4 that you must see

“It’s his job to finish the attempts, and one of them was a really nice attempt at a great time of the game for us, but he was strong outside the backfield and that’s his value to us,” Arthur added.

Ferguson’s late heroes bounced off the Tigers ’quickly completed attire which showed a lot of struggle to send scares through the eel camp.

The Eels looked comfortable early on as they skipped the 16-0 lead by trying big men Marat Niukore and Isaiah Papali’i breaking the spirit of the 29,056 pro-Tiger crowd at Australia Stadium.

A double shot by Tom Opačić before the half-time brought the guests further into the lead after the young cannons of the Wests Tigers Daine Laurie and Stefano Utoikamanu moved to the middle of the first half.

Ferguson fought back later in the second half with his own attempt to increase Parramatta’s lead to 24-10 as Gutherson clicked into gear and set the wing to the right.

40/20 to Reed Mahoney continued the guests ’momentum in the middle of the second half, but the eels began to fall with finishing rates, which Arthur didn’t like despite the result.

“Too many fundamental mistakes in the second half and a lack of respect for the feet,” was Arthur’s analysis of the opposition’s return.

“There are some things where we can go and we know we still have a lot of improvement in ourselves, but it’s hard to win from week to week in this competition.

“They were ready for it, Tigers, and they followed us, so we had to fight and shoot and hold on. We did it and I’m pretty proud of the effort.”