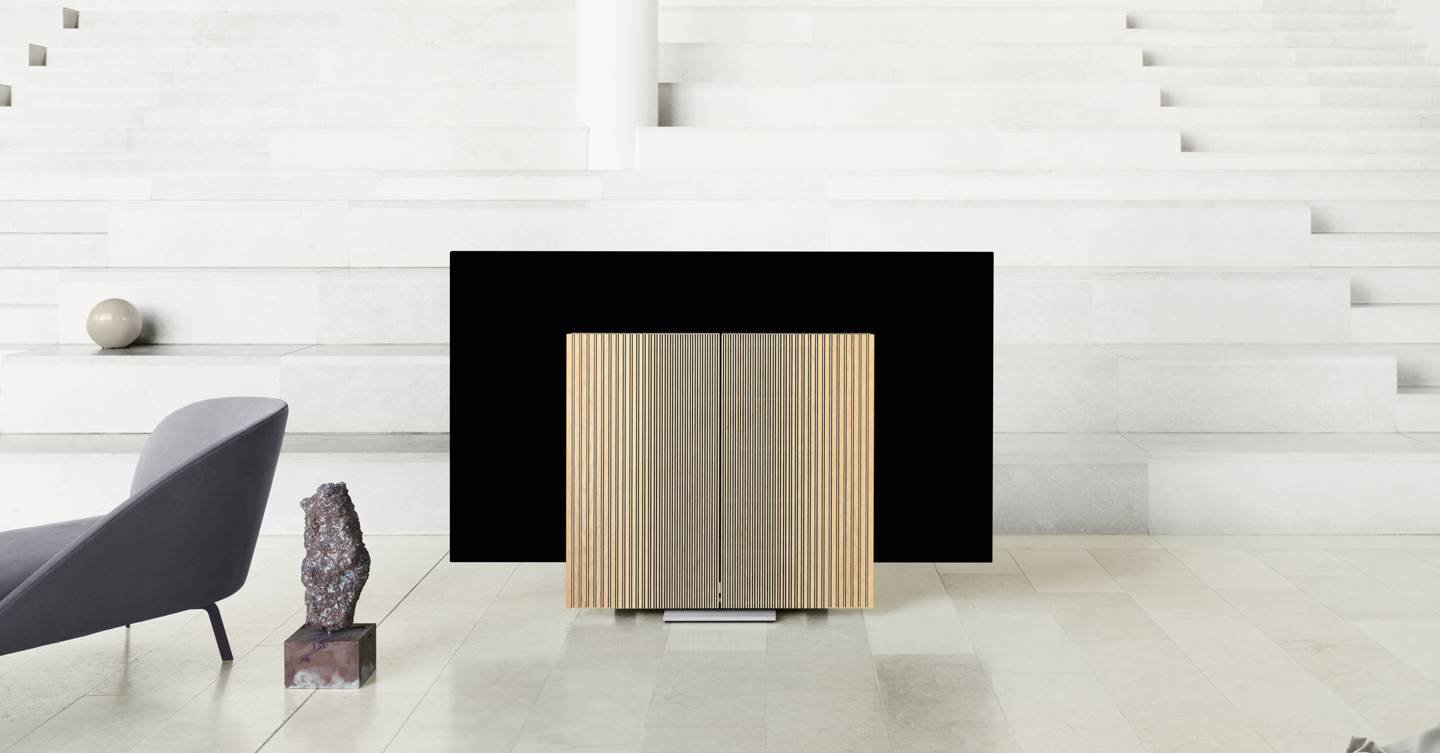 Televisions turn into a designer. Together with Samsung's Frame, LG's Roll Signature OLED TV and Loewe Bildo X, Bang & Olufsen has revealed its latest television, designed to be more of an interior than your standard TV.

The new Beovision Harmony TV, launched at the Salone del Mobile festival in Milan, has oak and aluminum front panels that are partially obscured by the screen itself. When activated, these screens rotate and rotate down to display the TV screen as it is raised to the viewing height at the same time. The trick is redirected, at least in the beginning several times, and is reversed when you turn off the TV.

When the device is off or plays music, the slim screen is near the floor, partially covered by two panels, featuring a triangular, fully active DSP sound system. Combined with the specially customized 77-inch LG OLED C9 display, B & O hopes that Harmony will attract those who are equally concerned about home decor as well as top home entertainment.

The Beovision Harmony is less subtle than the box, and not as technically as impressive as LG. Bang & Olufsen, however, hopes that the industrial design of "butterfly wings" in the set, though not hiding the television, will be enough to make the owners (and probably their guests) enough to forget the TV in the room and treat technology as part of the interior.

It's a little hard to imagine, just like the ridiculous Shaquille's attempt to avoid paparazzi "hiding" behind the tree, you can still see the screen running behind the speaker panel. However, every effort by a technology company to make a better look at the TV should be welcomed.

"The presence of a large screen is rarely a welcome addition to the living space," says John Mollanger, executive vice president of Bang & Olufsen for brand & markets. "With Beovision Harmony, we wanted to create a meaningful interior design object that reduces the visual presence of television and transforms it into something that people will develop emotional attachment."

However, Bang & Olufsen here actually restores the old field. The Beovision Harmony concept comes from the B & O Capri series, introduced in 1959, which is also designed to fit into the living room. The TV was built in teak – at that time wood furniture was preferred. In 1964, the Beovision Capri 611 FM SJ TV also offered a TV and worked in a lockable closet, allowing people to hide their electronics when not in use.

Although this modern version retains very few form factors of these early sets, the concept of "hiding" the screen in a unit that will also play your music and radio is clearly accomplished.

The best TV receivers for movies, movies and more in 2019

Speaking of the sound, Beovision Harmony offers music and radio streaming services such as Tune-In and Deezer. You can also stream directly from your smartphone via Apple Airplay 2, Chromecast or Bluetootha. The set also has a built-in 7.1 surround sound decoder that allows you to connect up to eight Beolab speakers, such as Beolab 18, Beolab 50, and Beolab 90. As for other smart devices, the set comes with LG's webOS 4.5 platform, which means you're covered for Netflix, Amazon and YouTube.

If this type of TV set is your aesthetic fancy, you should be prepared to expand far more than this Samsung Frame TV as Beovision Harmony retails at € 18,500 and will be on sale from October 2019. For this you get a choice of combined oak / aluminum front or combined gray fabric / aluminum front, and you can decide whether to use the floor stand or wall bracket included.

– The gaming industry should be concerned about Google Stadia

– As the application for revocation of Article 50 became viral

– I tried to keep my child secret from Facebook and Google

– Are you worried about privacy online? Then change your phone number

Get WIRED Weekender, your brief overview of the most interesting, unusual and unusual stories from last week. In your inbox every Saturday at 10am.

Thank you. You have successfully subscribed to our newsletter. Soon you will hear from us.

Unfortunately, you have entered invalid email. Refresh and try again.