Radar images and audio records show that the KNM frigate "Helge Ingstad" kept high speed and headed for the Sola TS tanker, despite repeated warnings that it would crash.

On 04.02am morning this was wrong in front of the Stureterminal in Hjällefjord. At around 17 knots, the frigate KNM "Helge Ingstad" is directly in front of the 250 meter long tanker "Sola TS". Before the collision was a fact, the heavy tanker had asked the warship to quit several times. 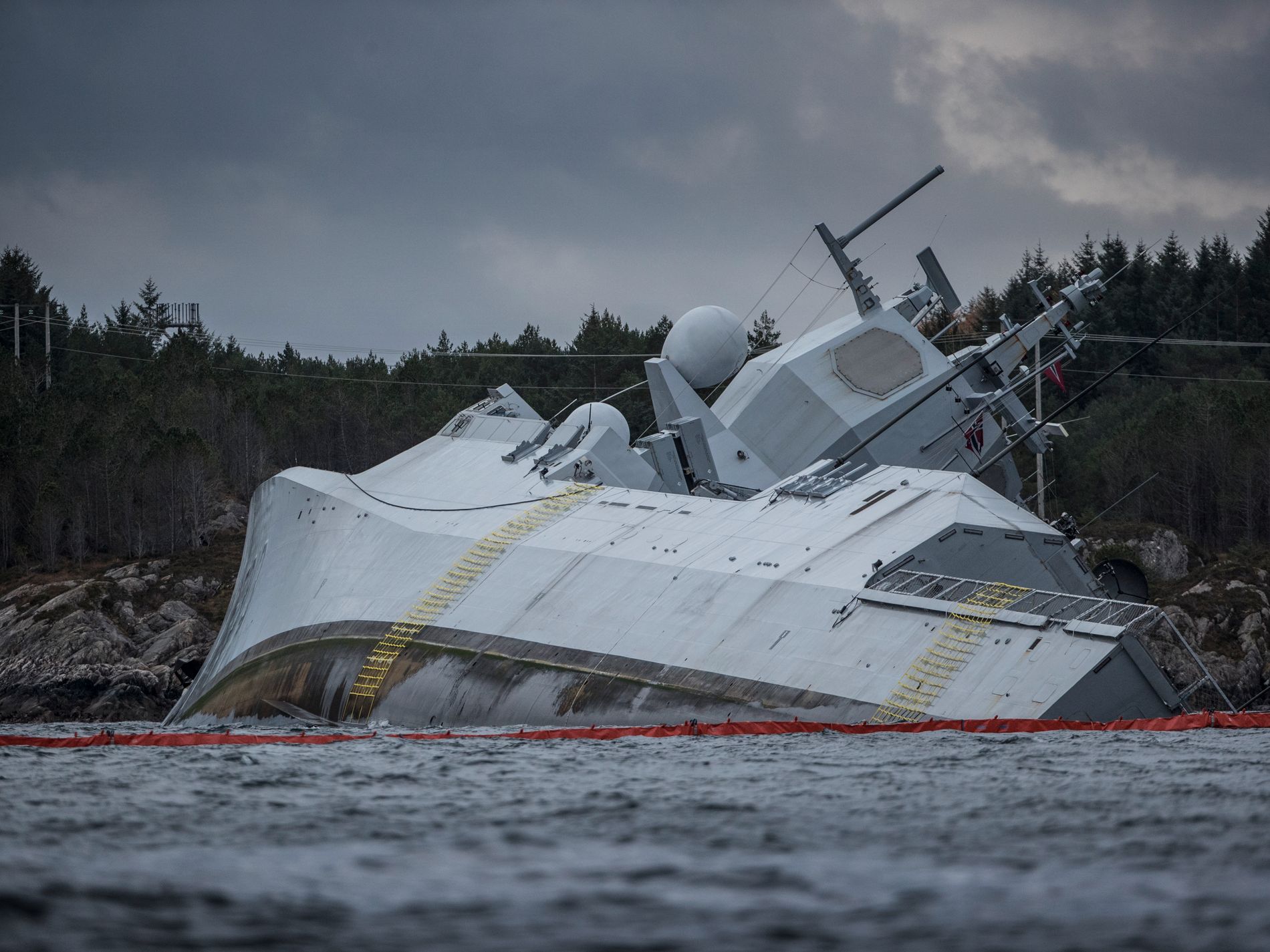 The consequence of this is that the war was for nearly four billion lies in a shallow area just outside the country.

Everything indicates that the warship has turned off AIS, which is an automatic tracking system. However, radar images show that the frigate is well visible to the ships around them.

ON THAT has confirmed that training on the frigate training during the collision.

In the picture below you can see the area's radar before and after the accident. The red figure moving from the upper left corner should be "Helge Ingstad".

An unknown ship on radar

Fedje VTS is a security center that is responsible for the flagships that are difficult to trade. Three minutes before she smells, "Sola TS" seeks a watch center on what boat will enter the fjord. Just over a decade later, they responded:

"No, that's hm, I did not get any information about it." She did not sign in. I just saw it appearing on the screen, "Fedje VTS says over the radio.

– No information about it, no. Not. No, okey, the tanker replied before working for 43 seconds.

Only now the radar image of Fedje VTS shows the speed of an unknown ship. They've seen moving to 17 knots. At the same time, "Sola TS" came up to 7 knots. They are on the collision course.

The tanker is looking for information about an unknown ship that comes directly to them. The central station replies: "It is possible that it is" Helge Ingstad. "He came from the north for a few moments, maybe he is coming there."

Now it takes one and a half minutes for two ships to collide.

Without being sure the frigate that comes against them, ask "Sola TS" if it is "Helge Ingstad" coming against them. This confirms the warship five seconds later.

The first contact between ships was created, one minute before it smells.

Immediately afterward, the tanker says the frigate that comes with them at 17 knots: "Go right on the right," they say on the radio.

The frigate response is: "Then we go too close to the blocks"

"Swing to the right, if you come in. So you are …", "Sola TS" answered immediately afterwards.

It will be so silent over the radio seven seconds before the next message comes from a warship: "I have a few degrees right while we passed, right, right."

Tanker repeats the message a few seconds later: "Helge Ingstad, you have to take some action. You're starting to get very close."

The message follows 15 new seconds of silence on the radio.

The next message from the tanker was: "Helge Ingstad! Turn around!" Three seconds ago, after saying, "Then there will be a crash."

It will take 15 seconds before the next message comes from "Sola TS".

Contact with "Helge Ingstad" will then be sporadic and sound sober from frigate alarms. "We turned the alarm, trying to take control of the situation, they say to the central station, confirming they collide with the tanker.

"Alright. Give me status as soon as possible ", responds to the Warning Center.

Meanwhile, the frigate moves toward the ground in five knots. Seven minutes after the accident comes a new person who took over the KNM "Helge Ingstad":

"We have a situation, we went to an unknown facility, and we have no progress." 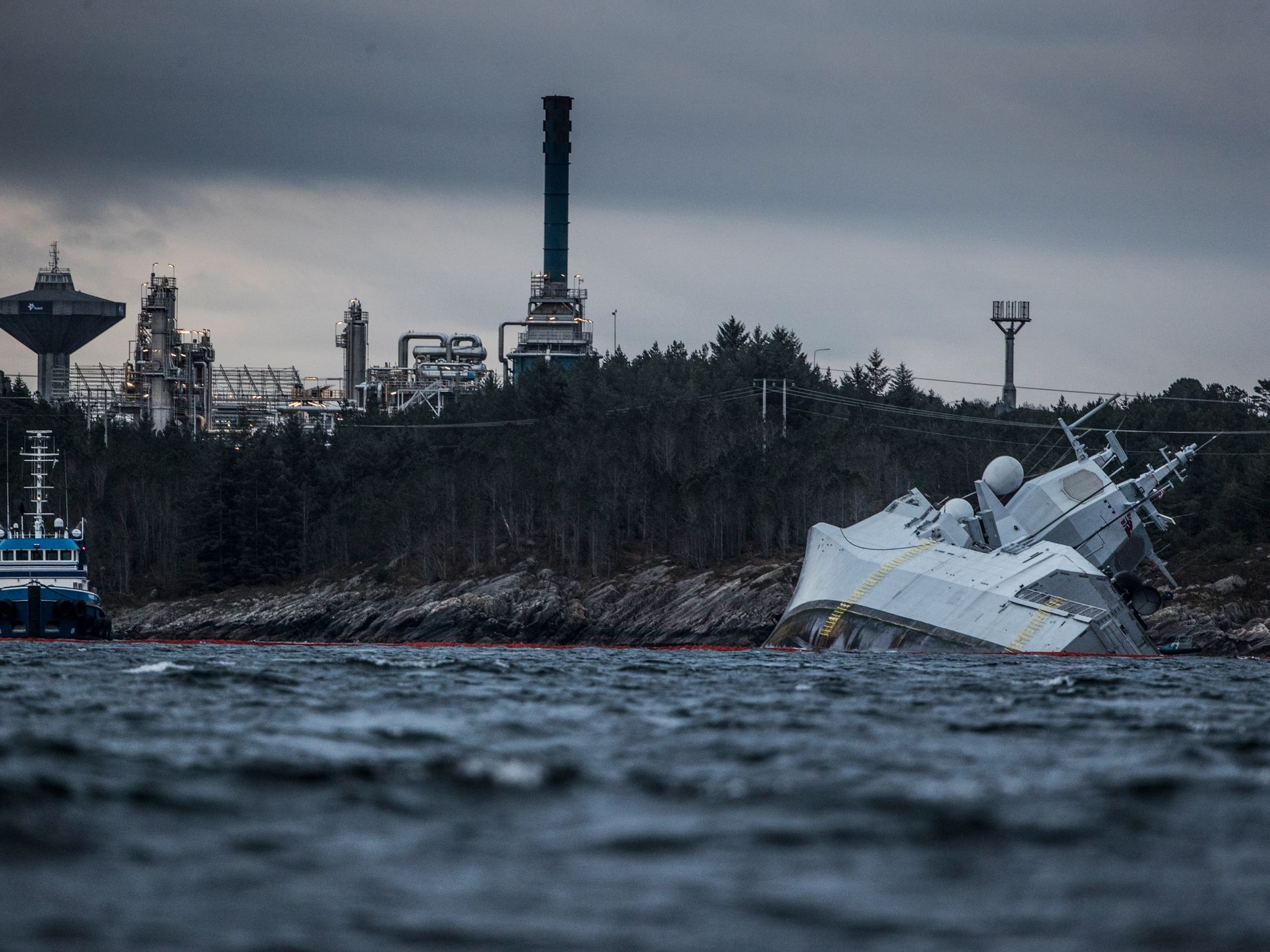 The central station says: "Helge Ingstad has no progress, and I'm aware of the conflict with" Sola TS "- they go to the country without a drive, are you wrong?" Immediately after, Helge Ingstad answers: " but I need help. "

The underground "Ajax" is immediately sent from Stureterminal. The submarine comes out of trouble but claims to have problems finding a ship. At the same time, "Helge Ingstad" illuminates the radio about new releases: "We got it, we need urgent help"

Taax "Tenax" reported that VTS would be able to look straight at KNM Helge Ingstad's engine room after the collision:

Soon the frigate sends the signal over the channel over the radio. It was 15 minutes since the collision with "Sola TS".

In the minutes after the collision, more boats will pass, and the entire crew of the "Helge Ingstad" of 137 people will be evacuated in the morning hours on Thursday. Eight were more easily injured, and two were sent to Haukeland University Hospital.

The consequences for the tanker were not brilliant: "There is nothing special here, let's go ahead and check on the arch." Then we stopped here, "they said the radio at the central station.

For Odman Jørgensen, a spouse on board Pinoeer Knutsen – a ship about half an hour from the accident, VG said that he had heard all the communication between "Sole TS" and "Helge Ingstad". He was presented with content audio log VG got access.

– Do you sound familiar?

– Yes, that's happening. It's just the way I remember that. I've heard it from the very beginning. I can confirm this, "says Jørgensen VG.

Mate said he believed that communication was part of the NATO Trident Juncture exercise.

"It sounded so unreal.

– When "Sola TS" said, "turn," "you are too close", "you have to do something" and nothing is done, it sounded totally wrong. I thought this must be an exercise, because communication was simply wrong.

The Danish officer, who has more than 15 years of experience on ships along the coast of Norway, says he did not realize that it was indeed an accident before his ship passed the "Helge Ingstad" accident about half an hour after the collision.

Cover VTS is subject NCA, Responds to all the information related to the occurrence of events committed to the police in Bergen and the Accident Investigation Unit.

"Formally, the police have taken over our data, so we can not comment on the conditions for communication before the accident," says regional director of the Regional Office in the West, John Erik Hagen.

– Are you talking about audio files and digital video surfing?

"This material is handed over to the police and the accident commission," Hagen replied.

VG checked AIS tracking against radar image, and they show the same movements for ships in that area.

After VG knows, KNM "Helge Ingstad" announced the arrival immediately after the book of the Navy Transport Center Fedje VTS. This is the inspection body that will monitor the traffic of ships in this area.

The VG informed the Armed Forces that the newspapers had an acoustic record and a radar image of the accident. They do not want to comment on this.

Here you can read more about