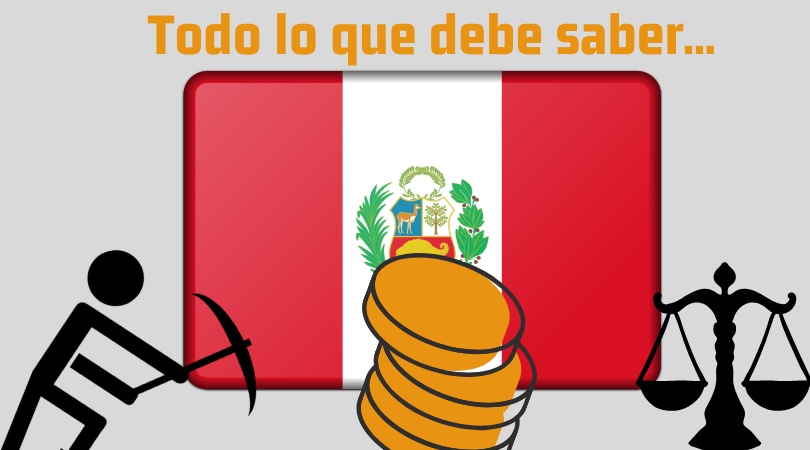 The most important guide when it comes to trading Bitcoin and other digital currencies in Peru and Blockchain adoption data.

Peru, a territory of great natural wealth and pre-Columbian architectural icons such as Machu Picchu, has also in recent years become a prosperous country for the cryptocurrency market. Latin America's largest mineral producer is also interesting Bitcoin and other digital currencies.

This year, South America ranked among the first in the region in terms of cryptocurrency transactions, after Colombia and Venezuela. During the month of October, a total of $ 4 million was sold in the Peruvian cryptocurrency market Bitcoin, Likewise, the country has also shown great interest in its core technology -Blockchain- Deployment of problem-solving applications in different sectors, public and private.

This new release "Everything you need to know about ..." It will try to answer some common questions related to digital property trading in Peru. Because of this, some aspects are related to the local digital currency ecosystem and Blockchain; and some legal, economic, technological and social considerations related to the use of property in the country.

Similar to the situation in other countries in the US subcontinent, there is no specific regulation in Peru that covers the delivery or promotion of cryptocurrencies. This lack of specific legislation to deal with commerce and other activities with digital currency is called the "situation"alegality".

About that, digital assets - cryptocurrencies, Tokens. stablecoins- are not legal tender in the country, although their trade and use are not penalized, In the past, the financial authorities of Peru have warned of the use of these types of assets, indicating that their acquisition may lead to «potential risks". This was the view taken by the Central Bank of the country to twitter last year

For its part, securities market surveillance in Peru echoed these warnings, pointing to the risks of fraud and its possible association with illegal activities. Like its risks to «high volatility"On the market. In the absence of direct regulations, cryptographic activities should be considered within the generative character of the law.

In this line, the Initial Coin Offer (ICO)) must have oversight of SMVs and / or supervision of banking, insurance and private pension fund managers, in accordance with section 2 of Law 30050 governing the supply of financial assets.

But there seems to be interest in starting legislation on trade and other activities related to digital currencies this year. In October, the Chief Justice of the National High Court against Corruption in Peru, Bonifacio Meneses Gonzales, called on the country's legislature to pass a special regulatory law for the use of cryptocurrencies. Authorities such as the Central Reserve Bank, Banking Supervision and SMV are expected to work to regulate the sector in the near future.

Cryptocurrencies are not supported by central banks and run the risk of high price volatility, fraud cases and their possible use in illegal activities. The price of Bitcoin has fallen 56% by October 2018, and additionally by 13% so far in November. pic.twitter.com/PL2uqggqFd

As in the rest of the world, the digital currency most popular in Peru is the main cryptocurrency: Bitcoin; followed by coins like Ethereum, In October alone, crypto enthusiasts in that country traded around 360 Shirt - in quantity - through the exchange platform LocalBitcoins, according to the amount reported CoinDance. In February this year, trade with Bitcoin reached a record point on the platform. Peruvian crypto investors have traded more than 1,000 BTC, which is almost $ 10 million (roughly 33.5 million Peruvian soles).

Market opening and the arrival of new cryptocurrency exchange platforms in the country have also expanded the range of currencies including Bitcoin Cash, Ripple, Litecoin and others

On the other hand, the Central Bank of Peru is also analyzing the possibility of issuing its own cryptocurrency, known as the CBDC (Central Bank Digital Currency). In an agency document issued in June this year, the bank noted:

The goal of the CBDC should not only be to generate a new alternative to digital payment (...), but mainly its issuance helps to achieve the goals of macroeconomic stability in the digital age..

In Peru, there is a large selection of platforms that provide buying and selling services Bitcoin and other digital assets, including:

Other alternatives that are very popular are sharing platforms P2P as LocalBitcoins. LocalEthereum and Paxful. These platforms pthey make it possible to buy and sell coins as Bitcoin and ether with different payment methods, including local currency.

This year's Asian exchange BITPoint announced its entry into the Peruvian market. The platform offers USD exchange pairs with Bitcoin, Ethereum, Bitcoin Cash, Ripple and Litecoin; and it also has options commercial branch.

Across the country, there are about 80 companies that have already introduced cryptocurrencies as a form of payment, data from Coinmap.org, Most establishments are located in the cities of Lima, Cusco and Arequipa, towards the center and south of the nation.

Although there are not as many crypto shops as in other countries in the region, the offer is quite diverse considering the type of businesses that adopt digital currencies. They include cafes, restaurants, electronics stores, hotels and even car rental services.

Among the diversity of the Peruvian capital you can find mini market from the food you accept Bitcoin, all the way to Dash, Etherum and other currencies

In terms of technology adoption Blockchain, Different industries that make up life in the country have begun to incorporate solutions with technology. The adoption of devastating technology is an ever-growing reality in a southern country where even government and public administration are involved.

The Ministry of Labor and Employment is one of the public entities it adopts in cooperation with technology Stamping.io. As reviewed Daily bitcoin, the goal of the project is to prevent forgery of documents such as criminal, police, judicial, academic and work experience.

Government Procurement Agency, Peru Shopping, use i Blockchain and has already registered more than 50,000 purchases using this technology. Other sectors such as the electricity industry, supermarkets and even the port of the country have shown interest in blockchain projects.

More recently, the largest industry in the country has announced a technology project. An important mining company in Peru, Minsur SA joined the initiative this October Blockchain mining and metals promoted by the World Economic Forum.

If you want to know more about the crypto world and Blockchain from other Latin American and Spanish countries, read our "Everything You Need to Know" section of Venezuela, Colombia, Mexico, Argentina, Chile, Brazil, Uruguay and Spain.