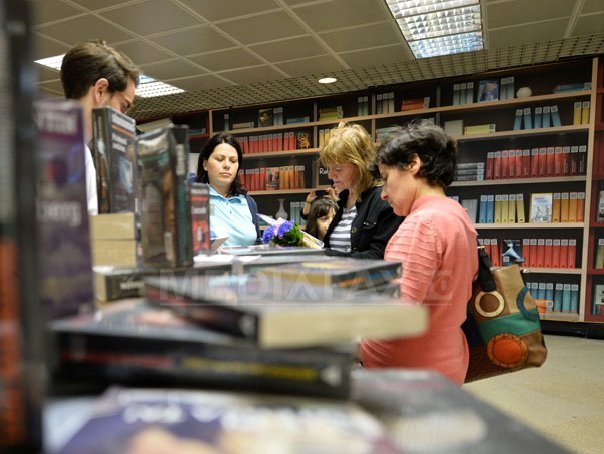 The 25th edition of the Gaudeamus International Book Fair is dedicated to centennial organizers and nine decades of the first radio show of Romania, so the audience will have to make a real slalom event as part of the anniversary event to find what it is interested in.

The official launch of the release is scheduled for Wednesday at the central Romexpo pavilion.

The central issue of the issue is Centenary Romania, and the honorary president of the fair will be Ioan-Aurel Pop, head of the Romanian Academy. The theme will illustrate a representative stand that will host a collection of 600 volumes dedicated to the Great Union and at least 50 events, including launching books and presentations, discussions, film screenings and public readings. The Centenary Romania Station is organized by the City Hall of Bucharest, through the National Museum of Romanian Literature and the Bucharest Museum.

The RAO publishing house publishes more than 1300 titles, including the latest news from albums, illustrated books and encyclopedias for adults, children and teenagers, the sequel to the drama series, thriller, fantasy, adventure novel, classical literature, special discounts and events devoted to the Centenary of the Great Alliance. The publisher's offer includes, among others, "The Queen in 3D, Brian May," the first album dedicated to the queen by a member of the band that appeared shortly after Bohemian Rhapsody was released in Romania.

The publishing house Polirom announces that it has been populated with about 1,500 titles and all in the discount (10-20%). Events dedicated to the latest phenomena in Poli include titles in the collections of "Author of the series Gabriela Adameşteanu", "Series of authors Andrei Oişteanu", "Fiction LTD", "Ego.Proză", "Memory Library", "Poly Library", "Junior" Gheorghe Crăciun "," Ego Graphs ". Since the release of volumes – Friday, at 12 noon – "Central Banks, Crises and After the Crisis, Romania and the European Union where" Daniel Dăianu and – Saturday, at 12.00 – Adrian Cioroianu's book "Hundreds of Centuries and More Domestic Works. they did not learn from the past century of history. "

Among the new performances announced by Paul on the Fontana di Trevi Gabriele Adameşteanu (published on Saturday at 2 pm), as well as recent translations from the Polium "Heart of the Man" Jón Kalman Stefánsson, "Zabor ili psalama", Kamel Daoud, "Defend Your crown ", Yannick Haenel," Angel of History ", Rabih Haenel," General Forgetting Theory ", Jose Eduardo Agualus," Mrs. Fletcher "Tom Perrot and" Heather, All "Matthew Weiner, launched on Saturday at 6 pm Sunday at 1:30 pm George Orwell ("How I shot an elephant"), Philip Roth ("Why to write") and Haruki Murakami and Seiji Ozawa ("Simply About Music").

Among the movements related to the theme of the fair are the book "Two Years of Romanian Populism", Robert Adam on Friday at 17.30, but also the volume "From the Ancient Daci to the Great Union, from the Great Union to Romania today", Lucian Boia, Saturday, 12.00. The book signed by Queen Elizabeth of Romania (Carmen Sylva), "Over the centuries, historical stories and popular legends for children" begins on Sunday at 11.00. On Sunday, Humanitas announces the book "Romania, I Love You!" With the lyrics of Paula Herlo, Rare Nostase, Alexa Dime, Cosmin Sava and Paul Angelesc at 13.00, as well as new performances in the collection of Denis Raft "Iakov" Ludmila Uliţkaia (14.30) and "Neamt Village or Diary of Brothers Schiller" by Boualem Sansala ).

The publishing house Litera has released more than 1,400 books, news from all areas, event books, launches, autographs, discounts, and prize games. My autobiography "My Story", Michelle Obama, is the star of the Letter Booth at the Gaudeamus 2018 Fair. "In his memoirs, a deeply reflexive work written in a charming style, Michelle Obama makes a chronicle of her experiences, beginning with her childhood in the south of Chicago, Management and combining maternity and professional responsibilities, and achieving the years at the most famous address in the world, is honest, powerful, fascinating, inspirational, "the editors say.

"Abraham's Covenant", Igor Bergler, appears on the New Letter in the collection of Buzz Books, and for readers present at the Gaudeamus Fair, a limited edition of 1,000 copies, numbered and signed by the author.

The offer of the publisher is not lacking in the "Lenjin Train", in which Catherine Merridale recreates the journey of the communist leader from exile to Zurich, along with Germany on the brink of war and north to the border of Lapland and the delighted reception that has prepared revolutionary mobiles at the Finnish railway station in Petrograd and " First World War, from Sarajevo to Versailles, "an illustrated volume of war that has changed the face of the world. In the sense of personal development, psychology and spirituality, Boris Kirulnik's "Psychotherapy of God" analyzes the need to have faith and "Courage not to love others" Ichira Kishimi and Fumitake Koga, talk about freedom and happiness.

Also, on Sunday, at 1:00 pm, Crime Scene Press will host the launch of "Funcoin Algorithm" and "Throw Your Sister on Train" (Stelian Ţurlea).

The European audience idea is focused on this edition of the Great Alliance centenary. Among the proposed links include "Two Europe", Răzvan Theodorescu and "Geography and National Awareness" by Mircea Plato.

And the participation of the Romanian National Historical Museum is aimed at launching three-year volumes dedicated to the Centenary National End of Unity, shows the institutions. The event will take place from 13.00 on Friday at the "Mircea Sântimbreanu" event, at 7.70 pm. The "Averescu-Prezan: The Great Marshall of Romania", "The Cities of the Union: Chişinău, Cernăuţi, Alba Iulia" and "The Leaders of Great Romania, Heads of State and Government (1918-1940)" are launched. Alina Pavelescu, historian and deputy director of Romania's State Archives, Manuel Stănescu, historian, Institute of Defense Political Studies and Military History, Cristina Păiuşan, a researcher within the museum, and Cornel Constantin Ilie, Deputy Director of MNIR. In fact, more than 80 titles of institution publications will be offered at the museum station at the same level.

Editorial ALL Group announces discounts up to 85%, news for all categories of readers, surprises and sweet gifts for children. Among the announced phenomena are "13th Book – Vision" of the new "Power Three" series, dedicated to "War cats", on Saturday at 12 noon. Those passionate about Guillaume Musso's thrillers will be thrilled to browse the novel "A Paris Apartment" for the first time. The publishing house also announces that the volume "has created impressive transformations in schools around the world, inspiring students to overcome the wonders of the winner, now available to the public in Romania." This is a book signed by Stephen R. Covey's Leader in Me. Another new story that is all about "touching" David J. Linden, in which the author converts neurological concepts into available information.

The Children's Book Publishing House brings more news to the younger readers. Among the new volume, "The Jonathan Toomey's Christmas Miracle" by Susan Wojciechowski, with illustrations by PJ Lynch, "The Christmas Gift for Horati Chiftelta" by John Burningham, was named "The Best Illustrated Book" in The New York Times Book Review "The Book with Please And Thank You", Richard Scarry.

The book publishing house will hold four readership sessions supporting Brandi Bates, founder of Read Together Romania. The first two meetings are held on Wednesday from 3 pm, from "Christmas Gift for Horati Chiftelta" and "Shush! We Have a Plan", and from 17.00 with "Jonathan Toomey's Christmas Miracle" and "Let's Hunt." The second series of lectures was scheduled on Thursday at 11 am with the song "This is the song for the healing of fish" and "Christmas gift for Horatiu Chifteluţă" and from 13.00 for "Jonathan's Christmas Wonder Toomey" and "Robinson".

The full program of events is available at gaudeamus.ro.

The 25th International Gaudeamus Book Fair will be open to the public from Wednesday to Sunday from 10am to 8pm.

The event was organized by Radio Romania, last time in the central part of Romexpol. The next year, the event will take place in new premises at the entrance to the exhibition complex.

The content of www.mediafax.ro is for your personal information and only for use. It is prohibited re-publish the contents of this site without the consent of MEDIAFAX. To get this contract, contact us at [email protected]

Message from Dan Negru, after Florin Călinescu announced his departure from Pro TV. “People grow where they are valued”