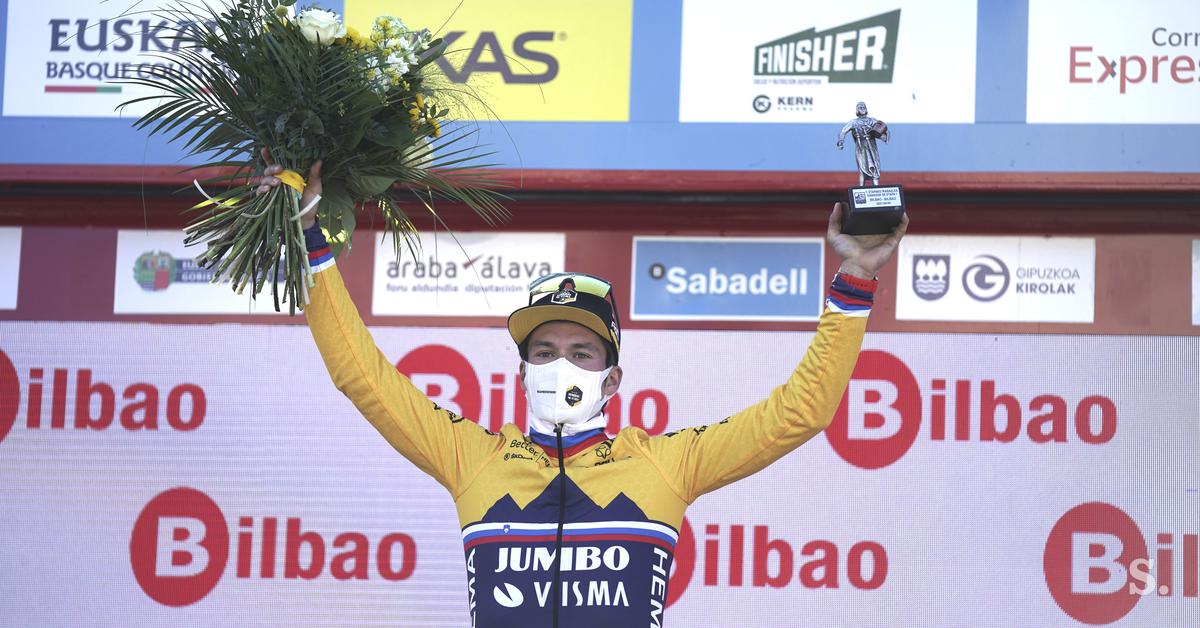 The 24-year-old Bask Aranburu made good use of his knowledge of the roads around Bilbao and won the second stage, 154.8 kilometers long, in which cyclists had to overcome 2,400 meters of altitude. Most of the stage in the foreground was ridden by a separate group of seven riders, and their escape ended with the ascent of the second category to La Asturiano, about 15 kilometers before the finish.


Tadej Pogačar also tried to attack on the slope, in the company of the Frenchman David Gaudu (Groupama FDJ) with Primož Roglič, he drove a few meters to the group of favorites, but was quickly caught again. Then the jump of the German Maximillian Schachmann (Bora-Hansgrohe) was followed by Roglič, but even that attempt was neutralized before the cyclists arrived back in the valley, where Astana launched the action. At first, Omar Fraile accelerated strongly, but with an attack “from the second row” he then surprised the local Aranburu and managed to escape.

Bask quickly gained an advantage of 35 seconds, which with an additional ten seconds of bonus for the stage victory would give him a joint lead in the race, but the favorites, including Roglič and Pogačar, kept the gap at 15 seconds. Pogačar was third in the stage, Roglič sixth, but Zasavec kept a five-second advantage in the overall standings of the race.

Also tomorrow, Roglič will ride in the yellow jersey of the leader, cyclists in the third stage are waiting for 167.7 kilometers from Amurrio to Ermauld with two slopes of the third, one second and the finish of the first category.

Goal: He beat Aranburu, the second was his teammate in Astana Omar Fraile, and the third was Tadej Pogačar. Primož Roglič was sixth, the Slovenians reached the finish line by bike 15 seconds behind the winner, who also received a 10 second bonus for the stage victory. Roglič remains in the overall lead, with a five-second advantage over Aranbur, Brandon McNuilt is third (+ 6 seconds) and Pogačar is fourth (+ 24 seconds).

1.9 miles to destination Aranburu is heading towards a stage victory, it will also take the overall lead in the race, it has a 35 second advantage over the group of favorites.

4.4 mi to destination: Aranburu already has a 24-second advantage over the pursuers. Is the Spaniard the winner of today’s stage?

6.4 miles to destination: on the descent, Roglič and Higuita distanced themselves slightly from the pursuers, who caught them on the plane, then attacked Omar Fraile first and finally Alex Aranburu (Astana Premier Tech).

How good Aranburu is. And what a desire to keep watching him grow.

Without a doubt, the best Spanish cyclist so far this year.# Itzulia2021 pic.twitter.com/3sIny80qsL

8.7 miles to destination: the difference between Roglič’s and Pogačar’s group is 11 seconds! Ecuador’s Richard Carapaz (Ineos Grenadiers) has fallen and is now battling in a group one minute and 10 seconds behind the leader.

10 miles to destination: German Maximiliam Schachmann (Bora-Hansgrohe) attacked, then Primož Roglič, and after a few meters they were joined by American Brandon McNulty (UAE EMirates) and Colombian Sergio Higuita (EF Education Nippo). Pogačar got stuck in the group from behind, the difference between the groups is quite large. Currently about 100 meters.

10 miles to destination: Roglic and other favorites caught Pogacar and Gaudu.

12 miles to finish: Pogačar attacked and took the lead, followed only by Frenchman David Gaudu (Groupama FDJ). Roglič does not answer, he drives a few tens of meters behind the leaders.

12 miles to finish: Oscar Cabedo (Burgos-BH) escaped alone, the rest of the riders from the escape group give in one after another, they are overtaken by a group of favorites, led by three people from the Movistar team, Roglič is close but left alone, his colleagues from Jumbo-Visma more are not visible. There is also Pogačar

23 miles to destination: escaped already climbing La Asturiano, at the head of the main group the drivers of the Ineos Grenadiers team accelerated the pace, the advantage of the leading seven fell sharply and is now only 28 seconds away. Roglič’s Jumbo-Visma and Pogačar’s UAE Emirates ensure their captains are safe.

30 km from destination: the runaways drive just under a minute before the main, in which another crash ensued, Wilco Kelderman (Bora-Hansgrohe) found himself on the ground, the Dutchman now chasing a group of favorites.

Get involved! These are men affected by the incident who have 31km before.

22 miles to destination: the riders have returned to Zallo, where it was also the start of today’s stage, the runaway seven still have a 1:35 advantage over the main, the hardest climb of the day will soon begin, on which we expect the favorites to attack.

Next climb on # Itzulia2021
Some very hard ramps in La Asturiana. Good time to surprise from afar pic.twitter.com/iWm8QiwMjn

50 miles to destination: the leading seven has only a 1:47 advantage over the main, the drivers are slowly preparing for the climb to La Asturiano (starting about 22 km before the finish), which will soon decide today’s winner.

Cyclists ride in light rain today, and it’s also pretty cold. Any carelessness can be dangerous on narrow roads, and Swiss Mauro Schmid (Qhubeka ASSOS) and Norwegian Andreas Leknessund (Tim DSM) are already on the field. They both continue the race.

60 miles to destination: the advantage of the rejected seven is slowly but steadily melting, it now has another 2:37 lead over the main group.

15:30: the caravan has another 75 kilometers to the finish of the second stage, there are three more categorized slopes in front, and the attacks began immediately after the start of today’s 154.8-kilometer stage. Leading Roglič, together with Pogačar and other favorites, is currently driving the main race, and in less than four minutes he is behind the escape group consisting of: Belgian Quinten Hermans (Intermarché – Wanty), Dutchman Martijn Tusveld (Tream DSM), Luxembourg AG Ben Gastauer) , American Kevin Vermaerke (Tim DSM) and Spaniards Jon Irisarri (Caja Rural), Oscar Cabedo (Burgos-BH) and Mikel Iturria (Euskaltel – Euskadi).

The nature of the course and the cold and humid conditions today will make it a very difficult stage in the Basque Country. pic.twitter.com/v4oD5eY6HN

Highlights from the first stage of the Basque race:

After the first stage of the Basque race Primož Roglič (Jumbo-Visma), who has in front of a compatriot Tadej Pogačar (UAE) in 5th place 28 seconds advantage. This is the first direct showdown between the two best drivers in the world this season, and although their eyes are really fixed, they both point out that there are others in the race who could get involved in the fight for first place.

Profile of the 2nd stage of the Basque Country race (155 km, two ascents of the 3rd category, ascent of the 2nd category 15 km before the finish and finish uphill) (slope 7.4%):

Roglič, who set the fastest time on the introductory chronometer yesterday (17.17), will ride today in the yellow jersey of the leader, while Pogačar will wear the point jersey of the best on mountain goals (3 points), as he was the fastest in the initial climb to Santo Domingo yesterday., where cyclists overcame 2.6 kilometers of trail uphill.

Pogačar’s teammate, a 23-year-old, will race in the shirt of the best young cyclist today. Brandon McNulty from Arizona, who missed the Chronicle victory by just two seconds yesterday.

Tadej Pogačar, who is in 5th place with a lag of 28 seconds after the 1st stage, will ride today in a T-shirt with dots, the best on mountain goals.
Photo: Guliverimage


The second stage will start at 13.37, and the drivers will arrive at the finish line around 17.30. Meteorologists predict light rain and temperatures around eight degrees Celsius.

The race will end on Saturday with the royal stage with as many as seven categorized climbs.

Profile of the 6th stage of the Basque Country race:

Order after the 1st stage of the Basque race:

The victorious return of Dončić and Dragić, the historic night of Westbrook