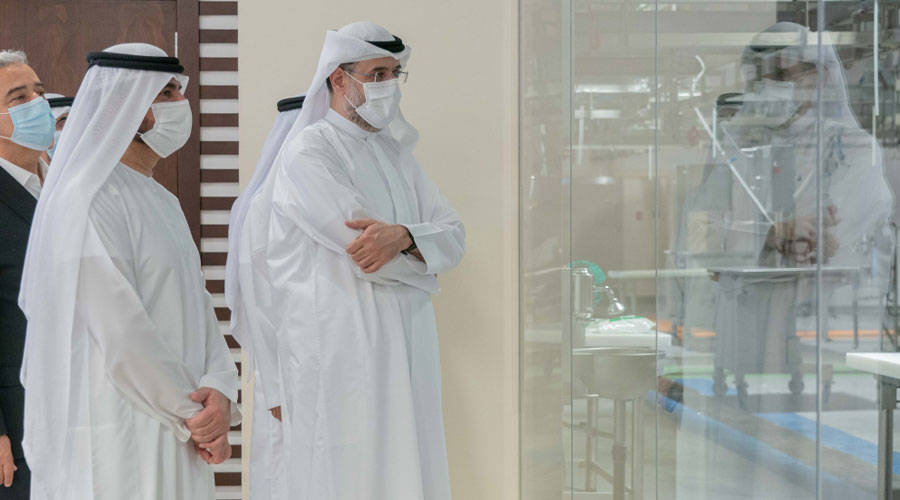 His Highness Sheikh Sultan bin Muhammad bin Sultan Al Qasimi, Crown Prince and Deputy Ruler of Sharjah, in the presence of His Highness Sheikh Abdullah bin Salem bin Sultan Al Qasimi, Deputy Ruler of Sharjah, yesterday morning, Thursday morning, at his livestock market in Sharjah in Al Sajai.
After unveiling the traditional curtain, marking the opening of the market, His Majesty listened to an explanation of the contents of the market and the services it contained to meet the needs of the people of the emirate. He also looked at a presentation on the stages of construction and the most prominent challenges it faced.
Afterwards, His Highness, the Crown Prince of Sharjah, toured the corridors of the market, touring the most prominent shops, stables and service facilities. Where the market includes 141 sheepfolds equipped with suitable sheds that can accommodate 6,200 sheep, 26 cattle farms with a capacity of 2,288 cattle, 12 camel shops with a capacity of 880 camels and 74 poultry houses.
The market also includes 44 food stores and 34 multi-purpose stores, in addition to 32 stores that include nurseries of various sizes. The stores are designed and built according to international standards approved in terms of size, general shape and content, with an emphasis on the elements of hygiene and public health in order to preserve the health of consumers.
The market also includes an auction area for the sale of livestock, in addition to a separate event yard, and the markets are interconnected through several hallways equipped with special 450-meter-long fans to ensure an ideal purchase.
The market includes a mosque with a capacity of 386 worshipers and 49 worshipers with all service facilities including the imam’s residence, ablution sites for men and others for women, with a market building for the market administration consisting of ground floor and first floor and includes 13 administrative offices, a room for meetings, rest room and cafeteria, in addition to a laboratory that includes equipment and facilities Modern laboratory, veterinary clinics that include surgical rooms, X-ray rooms, examination rooms and nursing incubators. the market also includes a private apartment for employees with all services and facilities, and can accommodate 200 employees.
Attached to the livestock market is a sophisticated slaughterhouse with facilities and equipment that works according to the latest technologies used in slaughtering, cutting and packing meat, either for personal use or for commercial purposes or for large events.
The slaughterhouse receives approximately 240 head of livestock per hour according to the following rate of the slaughter line, 150 to 200 head of sheep per hour, 20 head of cow per hour for cows and 20 head of camel per hour, with the addition of another poultry slaughterhouse.
His Highness, Crown Prince of Sharjah, continued with the mechanisms of operation of the slaughterhouse, which are performed using the latest automatic equipment, with the participation of specialized workers, and according to health and environmental control.
The opening was attended by Sheikh Muhammad bin Saud Al Qasimi, President of the Central Finance Department, Chairman of the Board of Sharjah Asset Management, Engineer Ali bin Shaheen Al Suwaidi, Head of the Public Works Department, Mohammed Obaid Al Zaabi, Head of Protocol and Catering Department, and a number clerk.