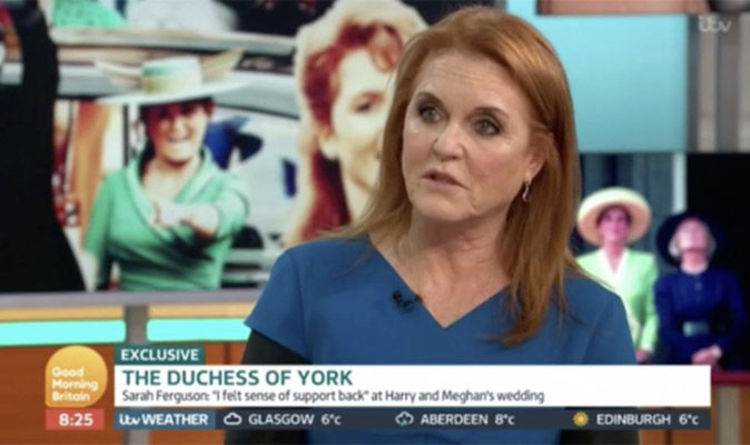 Talking about hosts Piers Morgan and Susanna Reid about her gorgeous green dress ceremony last month, Fergie's name – they dropped from the manufacturer and talked about her handbag Manolo Blahnik, giving her a confession to her late mother, Susan Barrantes, who attended her wedding to Prince Andrew . Referring to her dress and then a bag, the Duchess of York explained: "When I was wearing it, girls Emma and Louise formed it, and the purse was what Mom had in 1986 for my wedding and when I opened the bag was green a ticket from 1986, so I wore it green from the ticket from the bag. "

Susan Barrantes, granddaughter Princess Eugenie and Princess Beatrice, died in 1998 at the age of 61.

In a car crash, the Rover 400 was killed, which was hit by a Renault car on a two-lane motorway in the village.

Her death came a year after Princess Diana in 1997.

Fergie used her time on the program to talk about her hat, which the hosts reminded her to look like a Harry Potter bell, as two wings come from both sides of the garment.

The dictator said, "Well, we love the Golden Sound, but I did not understand it until later."

She also talked about how her marriage to Eugenie's daughter with a wine merchant Mr. Brooksbank provided her with much anticipated royal return as well as the invitation of Prince Harry and Meghan to their royal wedding in May.

She said, "She was very kind to them, she was nervous.

"It was old Fergie, she was extraordinary."

She also said that while she was in the Duke and Duchess of Sussex's Windsor wedding, she thought of Diana, she said that the late king would love every moment.

She said, "I thought of Diana, thinking of my mom.

"I was very happy for my friends Diane, who I love, and for my mom and dad. I was very honored to be invited."

She added, "Diana would love every moment, she would really be so proud."