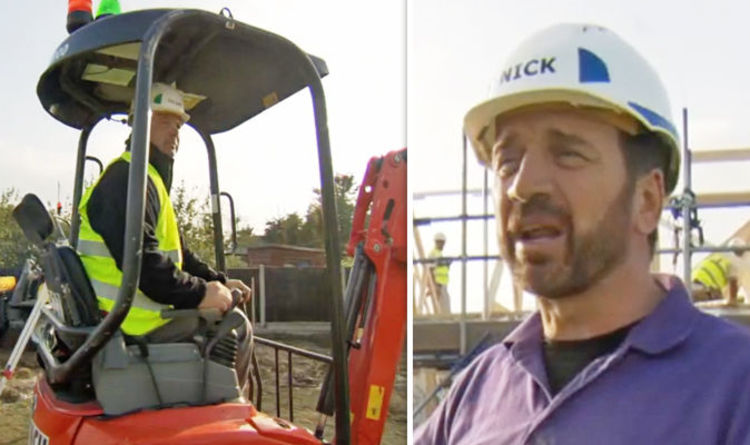 However, in the usual DIY SOS fashion there were several quarrels between the crew.

As longtime viewers will know, it was all a bit fun as part of the BBC show.

Nick presented a segment to the garden camera, saying: "For the first time ever at home, we could even be ahead of schedule!

"So we have to get to what would normally be the end of the day, but we are …"

At this point, Julian Perryman drove a noisy digger behind Nick to ruin his shooting segment.

Nick jokingly snapped: "Are you sorry? I'm trying to make a piece of camera at the end of the day here!"

Nick continued: "As you can see, we are still working and we will do it much later.

"Normally at the end of the day, I'll walk you around the building, but I do not want to do it because …"

At this point, Jules turned the noisy digger upside down to shoot.

Nick kept saying his jokes as he looked at Jules, adding, "I want you to understand what happens when we did …"

As the digger continued to stifle Nick's microphone, he jokingly threw himself into a rage, snapping, "That's it!

"I'm not serious, if you do not take it seriously …"

The episode of this evening focused on four vulnerable children who were adopted, three with complex special needs.

They desperately needed space and dignity, but the only viable option was to take down the whole house and start over.

The fragile structure and impractical design of the house meant that it was better to demolish the property.

The team demolished the bungalow and in just nine days built a completely new custom home with five bedrooms.

It was all thanks to the extraordinary benevolence, hard work and generosity of the local community and businesses.

DIY SOS continues next Wednesday on BBC One at 9.00pm.