People collected a goddess of $ 7.5 billion worth of statues in the Chien River 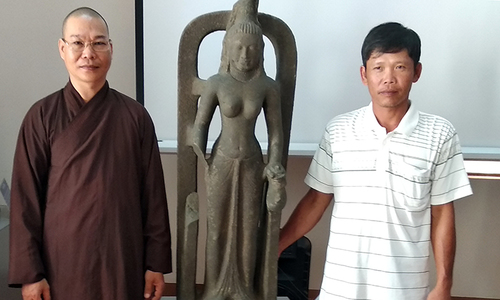 The Ministry of Culture, Tourism and Tourism in the Province of Vinh Long awarded on September 9 a certificate of merit and 75 million VND of the provincial People's Committee for the Great Virtue of Thich Duc Hien (Abbot Phuoc Pagoda, Tra On Municipality) and Mr Le Van Tam Binh) for the discovery and delivery of the ancient statues of goddess Saraswati.

In early 2017, while exploring the sand on the Co Chien River, Mr. Thong discovered the statue of an ancient woman who was supposed to bring gifts to Phuoc Pagoda. The Vinh Long Provincial Museum then came to find out and mobilize Mr. Thong and the volunteer pagoda to hand it over to management.

The Evaluation Council, made up of many antiquities experts in the country, founded by the Ministry of Culture of the Vinh Long Province, found that the statue of the goddess Saraswati, a woman of Brahma. It is a precious statue, in Southeast Asia not found, worth about 7.5 billion euros.

The statue is tall 1.4 meters, made of sandstone, dating from 6th to 7th century. Century. The statue has a very U-shaped frame. The true goddess smashed a line; The left hand holds the sacred water, which means to create life, to bring good people and to wash all sins. The pedestal was broken.

According to the Department of Culture of the Province of Vinh Long, the statue of the goddess Saraswati found in the Co River Chien is a rare material that contributes to the study of the history of the South. At the same time, artifacts reflected convergence and crystallization in the history of diplomacy between Vietnam and India; contributing to the study of Indian culture and religion in Vietnam.

Saraswati is the god of Hinduism in India, the god of knowledge, music, art and nature. She is one of three female gods (Trides), including Saraswati, Lakshmi and Parvati. Three goddesses together support Brahman, Vishnu and Shiva gods in creating, maintaining, and destroying the universe.