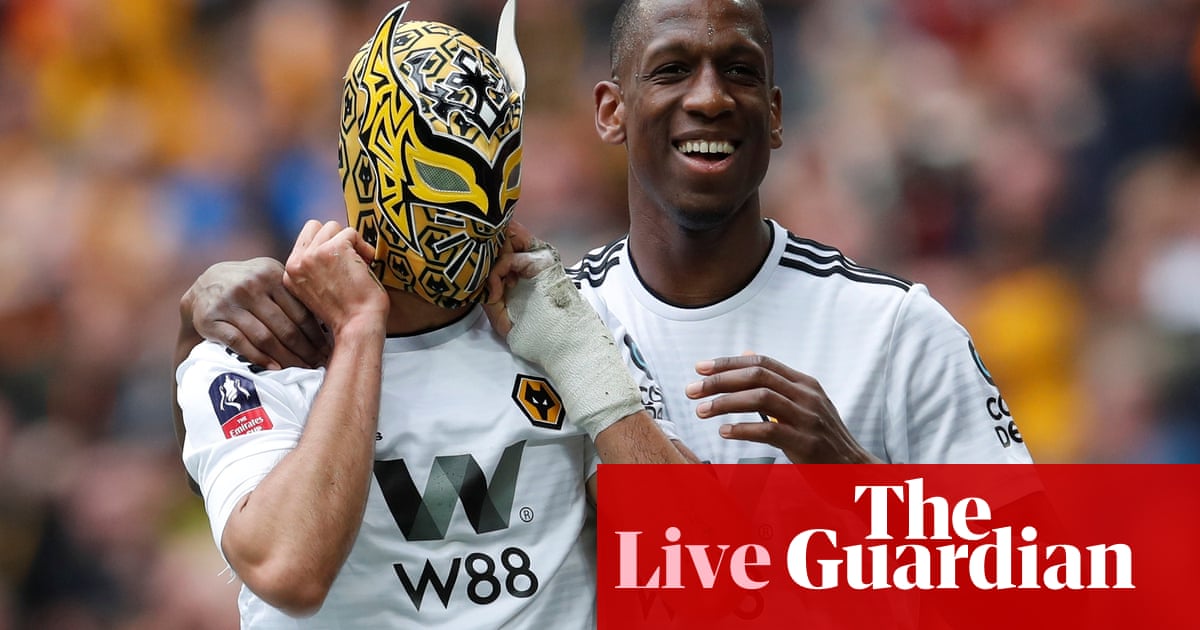 83 min: Angle Watford has been dropped and others will come. The ball is only half cleaned. Watford moves forward while Holebas raises the third corner. Wolves could separate, but I can not throw the ball.

80 min: Well, the decision to leave Deulofe seems all the more crazy. That was a great goal. Divna technique.

Holebas is launching a long throw, and Deeney is a target. The ball falls to Deulofeu, who turns and then hits the ball into the net, dropping like a pale golf.

77 min: Doucoure tried to silence, but Neves got in their way. Watford has now plunged forward, and their fans have been pushing them forward.

76 min: Matt Doherty might have got another for Wolves, but his touch dropped off after Neves had gone well. Watford goes long to the other end, looking for another ball, and eventually Boly gets the ball clear.

74 min: Gray and Deulofe are ready to lose the ball, and Jota goes away again, collecting heavy conditions and eating time, to continue what was wonderful in the afternoon.

72 min: Back to football. Watford seems to have lost heart here and their intention to use more hips is not coming to anything. And Wolves fans fill the air with the accents of West Midlands.

70 min: The public procurement system is now looking for a decision on VAT on the raised leg. Again, this sounds like a system announcing a railway station that has been mistaken. Is this help?

68 min: Wolves fans in full vote. And why not be with the first FA Cup since 1960, because you called it … It seems that this was a VAR action after the conflict between Deulofeu and Moutinha. Gomila heard that there would not be a red card from the PA system, but no one seems to know what's going on in every case. Or why there is a red card. VAR – not complete, right? Nothing beyond reasonable doubt.

66 min: Watford in deep trouble and eventually comes Deulofe, replacing Willa Hughes, who faded. Choosing Gray over Deulofe begins to look like a mistake by Javi Gracie. And especially with regard to those flaws.

64 min: That chest and lover sounded like Mark Hughes. Real brutal power married to skill. By the way, feminine heel played Jimenez on the side.

Wolves are on their way back to Wembley. Dohertyjev chip comes in the box and Jimenez throws the ball off and breaks the house … oh, here's the VAR for the gods … but not. The goal is standing.

61 min: Re-brilliant of yours, while floating through Watford defense before Holebas is brought down. Run ends halfway. Nuno on the sidelines is not fun.

60 min: "Shoooot," below Wolves fans, but Neves can not keep his sticker on the target.

59 min: Watford is retreating, but they are a bit unidimensional. Deeney is a danger, but there must be more variation to better organize the opponent.

57 min: Watford wins a free kick and picks up big people ahead. Deeney climbs most, perhaps too high while driving down the road.

56 min: Neves's free kick, on the left side of the box, screams and slides right behind the back. Gomes was not even close to it and could only observe him. Wolves had a chance to put this in bed.

54 min: Troy Deeney has a hard time on the sidelines, but his marker is weakly blocked. On the other hand, Jota is a fauled Cathcart, who takes a yellow card. Which is extraordinary.

53 min: Ian Copestake sends emails, obviously watching a similar TV show: "I can not believe I know more about football / real world than Glenna Hoddle, but he does not remember Sherpa's Van Trophy! "

Glenn's situation in 1988 was in Monaco at the end of the day. In 1987, when he left Tottenham, he was called Leyland DAF.

51 min: Close! Well, again, it shows great skill and invention, but Jimenez can not turn around the ball. It could have been sealed.

50 min: Hughes seems to find the opening but goes straight to Saiss. Watford took over the cloak again, but Wolves kept them in the bay.

48 min: Attacker Wolves Jimenez is about to save Gomez, lowering the ball from the Saiss pass and cutting from the inside to fire the shot. Gomes drops low.

46 min: And we'll go further. The wolves seem to sit slightly early, very early signs. Nuno, who taught José Mourinho's feet, was not the one to go to the break.

All right, we're okay you'll be back soon … the central parts of the forum are empty, as always at Wembley.

Peter Oh continues to make a joke: "It's good that Elton John is not in the house, because in a unlikely event when Wolves' Moroccan international defender reaches a decisive goal, I have" Saiss on song "with a lot of messages.

Two minutes of added time are over. Goal Matta Dohertyja came up against the run, but Wolves could have added it when the shot was scored. Andre Gray will surely spend half the time on two occasions, the first goal wide, the other did not hit enough buy to pass near Conor Coad.

45 + 1 min: What a block! Deen's mirroring finds Gray and seems to have a golden chance, but as he pulls the trigger, Conor Coady comes over. Heroic things from Captain Wolves, but again Gray had to do better.

45 min: Will Hughes, who was great, looks the best of Watford's chances for something. On the other side, Femenia shows her frustration.

44 min: Watford has to see this by half, maybe, but go for a match on the equalizer. Gray, who missed this pearl, ran out of the car. The goal scored the rhythm found in the first 37 minutes.

41 min: If individual skill was crucial, then Diogo Jota made the difference with the key passing goal, after creating the space for himself to do so and then on the slalom race he followed. Meanwhile, Jimenez fled the target before being thrown out. Wolves are full of confidence.

39 min: Wolves are now on the rise. Which breaks at high speed, checks and shoots. There were several fans who thought they were gone. Danger to Watford.

There was a run of the game while Jonny chasing the ball on the back path, and Doherty pulled to the head. He came from a short corner, and Doherty, on the opposite side to his usual, entered the back path.

35 min: The wolves force it to save Gomez. Jonny slipped from the ankle, shimmies passed several plays and placed him at Dendonckera, who scoffed at the goal.